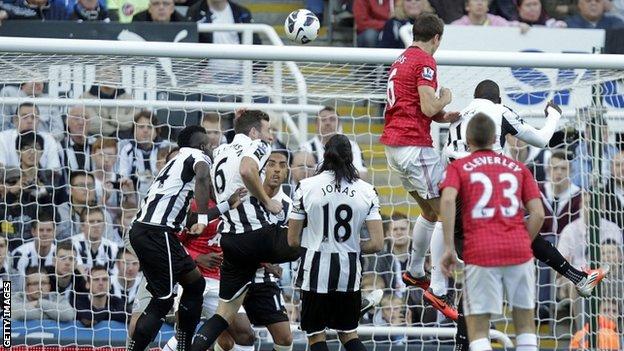 Starting the day seven points adrift of leaders Chelsea, it was vital for the visitors to pick up three points, and two headers from corners in the first 15 minutes set them on their way.

Tom Cleverley made it 3-0 when he curled the ball into the top corner.

The midfielder might have been trying to find Robin van Persie at the far post, but the ball flew out of the reach of home keeper Steve Harper and into the goal.

While the goal may have had a touch of good fortune, there was nothing lucky about the Old Trafford club's overall display.

Sir Alex Ferguson's men were rampant in the opening quarter, helped by some amateur Newcastle defending at set-pieces, and twice went close before the first goal.

Danny Welbeck, who played furthest forward in a three-man attack featuring Wayne Rooney and Van Persie, was first to try his luck but struck a woefully tame shot from six yards.

Harper then had to guard his near post to stop Van Persie's toe-poke from sneaking in, but he had no chance when Evans powered home a header after eight minutes for only his second goal for the Red Devils.

Manchester United have now scored five goals from corners this season, more than any other side in the division

Newcastle had the jitters and could have fallen further behind but, after creating another chance for himself when he closed down the dawdling Harper just inside the area, Welbeck failed to find the empty net.

However, the visitors made the pressure count again a couple of minutes later when Evra advanced from the edge of the area to head in his first goal for the club in two seasons.

The highest scoring match between the teams at the ground was in January 1960, when the hosts won 7-3, and with only 15 minutes on the clock another 10-goal feast - all scored by the visiting team - did not seem totally impossible.

But the attacking waves from the visitors died down, allowing Newcastle to come back into the match.

Magpies boss Alan Pardew tinkered with their tactics and had a quick word with his backline as Evans received treatment for an injury, and that seemed to help mend the leak in defence.

But the home side were also lacking inspiration in attack and once again the Demba Ba-Papiss Cisse partnership failed to shine, although they did suffer from poor service.

The pair were central to Newcastle's best effort, though. Ba flicked a header towards goal and when the ball came off the post it was nodded towards the net by Cisse, but the agile David De Gea just managed to claw it away before it had crossed the line.

Hatem Ben Arfa and Yohan Cabaye also had efforts on goal, but they were as half-hearted as the Magpies' display.

Cleverley rounded off a miserable day for Newcastle with his spectacular effort.