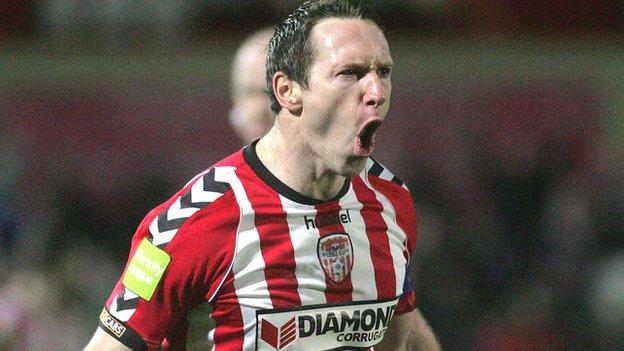 The 28-year-old former Derby County and Drogheda United midfielder is a key player for the Candystripes.

Derry will be aiming to bounce back from Friday's 4-1 defeat by Sligo when they host the basement club.

City's biggest game of the season comes on Sunday with a home FAI Ford Cup semi-final against Shelbourne.

Derry lie eighth in the standings after a disappointing league campaign and manager Declan Devine has played down speculation over his future.

"It is out of my hands - there is no-one more disappointed in this city than myself," said Devine.

"It's my first first job in management and I have learned an awful lot. I'm very determined and focused to do well for this football club.

"The speculation does not bother me - I'll keep my head down and I will keep concentrating on what is right.

"We have an opportunity to win a trophy. The players and backroom staff are working hard to achieve that bit of success before the season finishes."