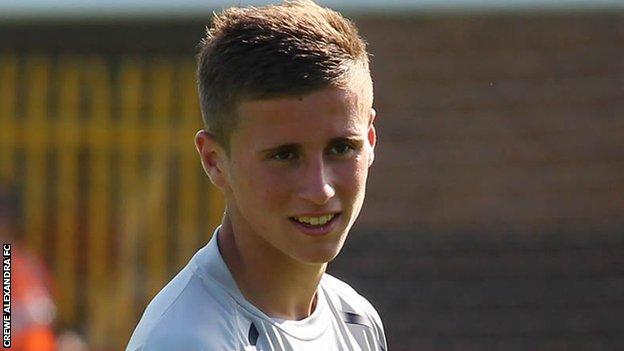 Crewe's teenage striker Ryan Colclough is expected to be out until the new year with the broken jaw he suffered against MK Dons last weekend.

Colclough, 17, suffered the injury in a challenge with home midfielder Darren Potter after coming on as a second-half substitute in only his second game.

Crewe boss Steve Davis had hoped he might be back by the end of November.

But, after seeing a specialist, it has been decided that the jaw needs pinning and that he must undergo an operation.

Having made his Crewe debut as a 79th minute sub in the 1-1 draw against Orient just a week earlier, Colclough this time entered the fray a little earlier as replacement for fellow teenager Max Clayton, who had suffered a dead leg.

But he ended the game in pain after the challenge from Potter, which Crewe boss Davis was surprised to see go unpunished.

"Colclough took a nasty knock," Davis told BBC Radio Stoke. "He played on with it and afterwards was in a lot of pain.

"I don't think it was intentional, or that it should have been a sending off, but the lad certainly leads with his arm.

"And, when you raise your arms around someone's face, you know there's a chance you are going to hurt them.

"It was right in front of the ref, who was about six feet away and didn't even give a free-kick.

"The best way of stopping a 17-year-old is to rough him up a little bit and maybe that's what he was trying to do."

But Davis is confident that the injury will not have any lasting effect.

"It's a little setback for him as he's been pushing himself into the squad and he's been getting on the pitch," added the Alex boss.

"I'm sure he'll recover. It's just the mental scars it might leave when he makes that sort of challenge again."