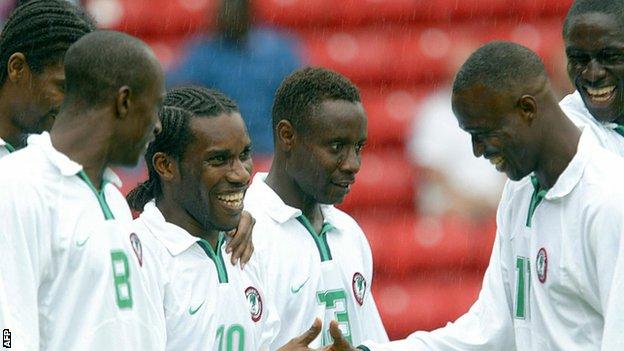 Nigeria have announced a friendly fixture, to be played against Venezuela in Miami next month, which they hope will form part of their Cup of Nations preparations.

The Super Eagles tackle Liberia at home later this month in the second leg of their final qualifier for the 2013 Nations Cup, locked at 2-2.

A win over Liberia should then guarantee a big crowd for the Venezuela match on 14 November, to be played at Marlins Park Stadium, home to the Miami Marlins Major League Baseball team.

Nigeria's last friendly match, against Ghana, followed their failure to reach the 2012 Nations Cup, and resulted in a poor crowd for the fixture in Watford.

Only a Super Eagles qualification for South Africa will guarantee a full house in Miami - a fact not lost on the Nigeria Football Federation (NFF), nor their official match agent, Eurodata Sport Marketing.

"I am very happy for us to secure this game as it is on the Fifa calendar," Jairo Pachon of Eurodata told BBC Sport.

"It's also important to underline the fact that both countries will present full-strength line-ups.

"Sadly, that failure to qualify for the last tournament in Gabon and Equatorial Guinea affected us and the match organiser in Watford.

"Hopefully, it will be a different case in the US because Nigerians there are craving for the national team after such a long time."

Nigeria won their last encounter against Venezuela, more than nine years ago, with a goal from Jay-Jay Okocha.

"Hopefully it will be a great opportunity for the team to test themselves against one of the tough teams from South America," NFF spokesman Ademola Olajire said.

"The most important thing for now is the Nations Cup qualifier against Liberia.

"We need to qualify for South Africa and ensure Nigerians in the United States come out to 'happily' support their beloved side."

Nigeria will host Liberia in the second leg of the qualifier in Calabar, with the eventual winners qualifying for the 2013 Nations Cup.

The west Africans failed to qualify for the 2012 edition in Equatorial Guinea and Gabon, which led to the sacking of Samson Siasia.