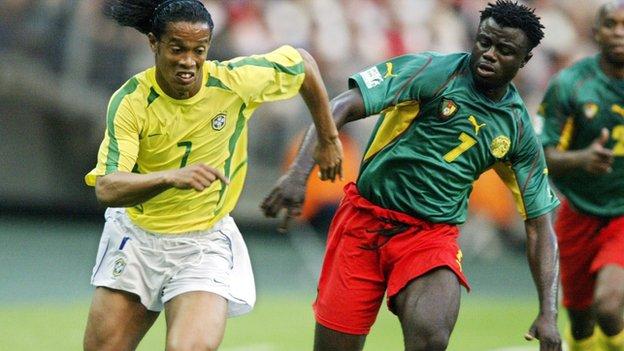 Cameroon coach Jean-Paul Akono has named his squad for the must-win Nations Cup qualifier at home to Cape Verde later this month, and it includes a number of surprises.

With Cameroon trailing 2-0 from the first leg, Akono has seemingly trawled back through the archives and dusted down some names from a bygone era.

Among those listed in his 26-man squad are Modeste Mbami, who last featured for Cameroon under Otto Pfister in March 2009.

Others named by Akono include Mohamadou Idrissou and Pierre Webo. Idrissou, at 32, may have felt his time had come and gone with the Indomitable Lions. His previous cap came against the Netherlands at the 2010 World Cup.

Webo has been stuck on 49 caps since a friendly international against Russia in June last year.

Akono has previously worked with all three players, and insists he is doing what he feels is required to reach the Cup of Nations.

He also refuted suggestions that the players were too old: "Age does not count as long as the players are physically fit.

"Once they train and are competitive there is no problem."

With him at Malaga is goalkeeper Idriss Carlos Kameni, who has not been a regular for the La Liga club, but Akono says he will have a role to play.

The players meet in Brussels on 8 October, from where they will fly to Yaounde to train ahead of the match.

Cameroon squad for the Africa Cup of Nations qualifier against Cape Verde.