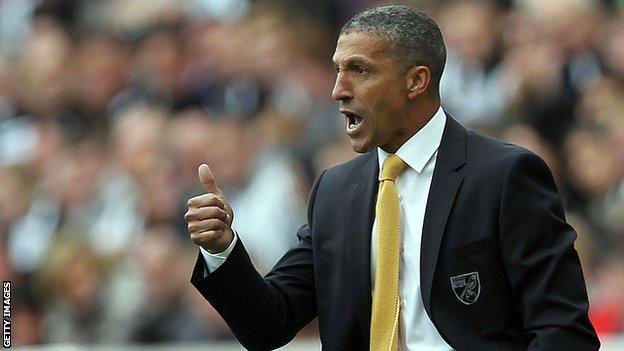 Norwich City boss Chris Hughton has said he understands concerns over results this season, but expects a response from his side.

The Canaries, winless in the league,

They were also on the opening day of the campaign.

"Supporters want to get behind us and they get disappointed when they don't see the type of performance that we want - all of that is understandable," Hughton told BBC Radio Norfolk.

"But it's up to myself and the team to make sure we're able to bounce back and show the spirit we did after a poor first day of the season."

Norwich appeared to be making progress after the season-opening loss at Craven Cottage by taking points off Queen's Park Rangers, Tottenham and West Ham before running Newcastle close in

However, an instant response to the defeat by Liverpool will be difficult with games against Chelsea and Arsenal next on the fixture list.

"What they [the fans] would have seen in the four previous games is a team that's been close. Even up at Newcastle we were in the game," said Hughton.

"It's the nature of the game that they saw a completely different performance.

"The only plus was we managed to be spirited enough to get two goals back. We've found it difficult to score goals and possibly that might do us a little bit of good."

Meanwhile, the former Newcastle and Birmingham City manager was forced to explain the absence of creative midfielder Wes Hoolahan from the weekend's starting line-up.

The Irishman had received praise from Hughton for his performance against the Magpies but was restricted to a role off the bench versus Liverpool.

"I wanted to go four across midfield. I felt the fact we were at home - I wanted to seize the opportunity to be a little more aggressive and play two strikers.

"With Wes's quality we know what he can give the team. With Wes in the team you have to adjust that midfield for him. But with what they had in wide areas I felt we needed four across midfield," Hughton added.