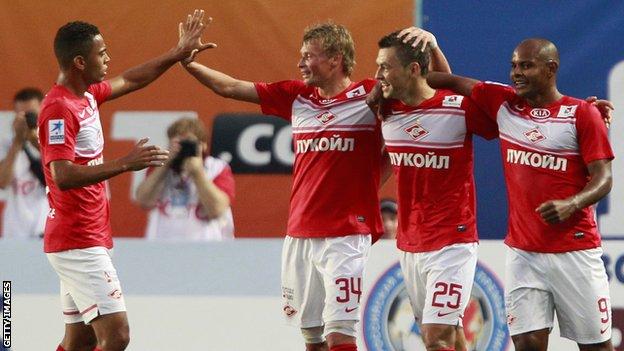 No sooner had Celtic reclaimed top spot in the SPL that many believe will be theirs in May, they were heading to Russia as attention turned to Europe.

Champions League Group G began with a solid but goal-less encounter with the Portuguese side Benfica.

It may be as early as this week that we find out whether that was a point gained or two dropped.

With a daunting double-header with Barcelona on the horizon, it looks as though at least a point will have to be secured at the Luzhniki Stadium on Tuesday, though they wouldn't admit it.

Celtic's away record in the Champions League leaves a lot to be desired: 20 games played, 19 defeats.

But Neil Lennon can take solace from the fact that Spartak's Champions League home form isn't much better.

Are Spartak Moscow better than Benfica who failed to impress at Celtic Park? It's doubtful they are

They have won just once at home in the group stages in their last 12 games, when they hammered MSK Zelina 3-0 in 2010.

Aiden McGeady's name is certain to be on manager Unai Emery's team-sheet. That is the same Emery who led Valencia against Rangers in this competition two years ago.

McGeady has been in Russia for two years now and has settled well whilst picking up a good grasp of the language; he loves life in Moscow.

But he was suspended from Saturday's 3-1 away win at Amker Perm.

Spartak like to play a 4-4-1-1 formation; at the weekend that included Emmanuel Emenike up front and he could come up against his Nigeria international colleague Efe Ambrose.

Supporting him was Georgian youngster Jano Ananidze, who is so highly thought of in his homeland that he made his full international debut when he was 16.

Spartak have a big and expensive squad with Kim Kallstrom, who has arrived from Lyon, an important and vastly experienced cog in the midfield.

The Sweden midfielder started on the left and scored one of the goals on Saturday along with Brazilian Ari who was on the other side of the midfield four.

Recent addition Diniyar Bilyaletdinov didn't start that match and has had a tough 2012.

He had a blast at Everton when he left Goodison in January, claiming David Moyes didn't give him a chance.

He was also a shock exclusion from Dick Advocaat's Russia squad that went to Euro 2012 and has a point to prove.

It is a Spartak team that led Barcelona before Lionel Messi turned the tide late on in the Nou Camp.

Lennon admitted on Monday that the Russian League leaves the SPL trailing in its wake in standard and more so, finance.

Spartak, Zenit and moneybags Anzhi all appear to have as much spending power as the other big leagues in Europe.

The Russians have changed their football calendar from the previous Spring to Autumn one - which avoided the harsh winters here - to one akin to most of Europe.

They now start in July, have a three-month break and resume in March.

To make that change they had a mammoth season last time around in which Spartak finished second, 13 points behind champions Zenit.

Are they better than Benfica who failed to impress at Celtic Park?

It's doubtful they are, but Celtic know they'll have to take something other than just their luggage back to Glasgow if they're to stand any chance of progression.