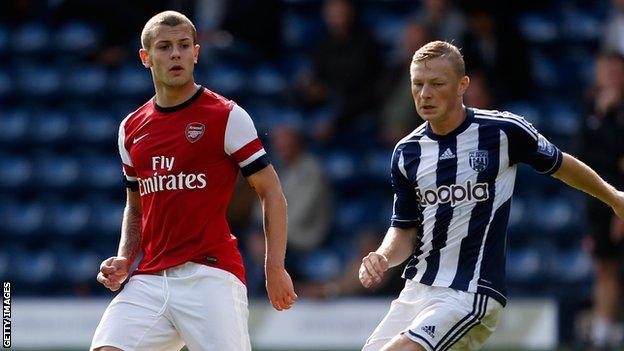 Jack Wilshere made his return from a 14-month injury lay-off by playing over an hour for Arsenal's under-21 side against West Brom.

The England midfielder, 20, missed all of last season because of ankle, foot and heel injuries.

He took a significant step towards recovery with an encouraging display against the Baggies.

The midfielder is working his way back to full fitness after being sidelined for seven months with a knee injury.

Both Wilshere and Frimpong are likely to step up their recovery in the under-21s game against Reading next Monday.

Wilshere's last Arsenal appearance was in a pre-season friendly against New York Red Bulls last year, when he suffered an ankle injury.

He encountered complications in his rehabilitation and then suffered a knee problem that required surgery last April.

While lacking sharpness, Wilshere looked lively against West Brom before he was withdrawn in the 63rd minute.

West Brom won the game 1-0 with Yassine El Ghanassy scoring the winner in the 40th minute.