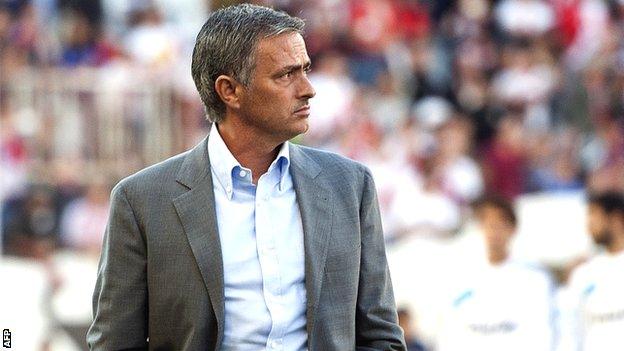 Jose Mourinho says he will return to English football when his reign as Real Madrid manager ends, but the Portuguese insists he is happy at the Bernabeu.

While the ex-Chelsea boss is contracted to Real until 2016, he feels his next job will be back in the Premier League.

"I just say openly that, for many reasons, after this the next step will be England," the 49-year-old told CNN.

"When? I don't know, I don't have an idea. I'm so happy in this moment to be manager of the best club in the world."

Jose Mourinho has won the league title in every country he has managed - Portugal, England, Italy and Spain

Mourinho joined Real from Inter Milan in 2010 having guided the Italian club to their third European Cup triumph.

His side missed out on the Spanish league title to Barcelona in his first season but got the better of them a year later.

He has been mentioned as a potential successor to Sir Alex Ferguson at Manchester United, but Mourinho says he would rather the Scot still be in charge at Old Trafford when he returns to Britain.

"The perfect scenario is when I go there he is still coach," said Mourinho. "Because football will lose a lot when he stops.

"For me, he is the boss. I call him the boss because he is the boss of the coaches and I hope when I go back to English football he is still manager of Manchester United."

He made a shock exit from Stamford Bridge in 2007 after his relationship with Blues owner Roman Abramovich grew troubled.

But when asked if he would consider working under the Russian at Chelsea again, Mourinho replied: "Of course, of course.

"It was a perfect example of a fantastic divorce. We are a lot in touch. We have a great relationship."