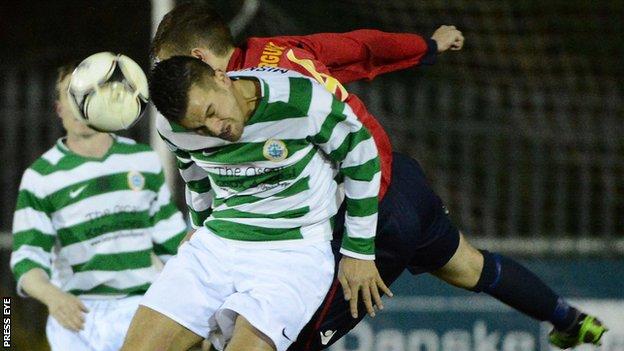 Donegal Celtic secured their first win of the season with a hard-earned success over Lisburn Distillery in the County Antrim Shield quarter-final.

Distillery took the lead in the 23rd minute when a Johnny Harkness free-kick went in off team-mate Jordan Forsythe who was credited with the goal.

Peter McCann netted the DC equaliser on 66 minutes, chipping over keeper Lee Windrum from just inside the box.

It was a much-needed boost for the Suffolk Road side, coming a day after the resignation of their manager Stephen Small.

The former Carrick Rangers supremo had presided over a dismal early-season run during which the Hoops had failed to win any of their nine Premiership fixtures and were beaten at home by Championship outfit H&W Welders in the League Cup.

It had looked like it could be another bleak night for Donegal Celtic as Distillery, the only team below them in the league table, scored the opener midway through the first half.

Conor Downey's foul on Scott Davidson resulted in a free-kick and dead ball specialist Harkness' effort went in off Forsythe.

On 52 minutes Downey went close to levelling when his long-range shot struck an upright, and then Miskimmin was just over with a fiercely driven shot.

DC got their equaliser when Downey's goal attempt deflected off Distillery defender Andrew Ferguson and into the path of former Whites player McCann who calmly chipped in for 1-1.

McVeigh had a goal disallowed for a foul on the keeper soon afterwards but the long-serving DC stalwart grabbed the long-awaited win with that late header.