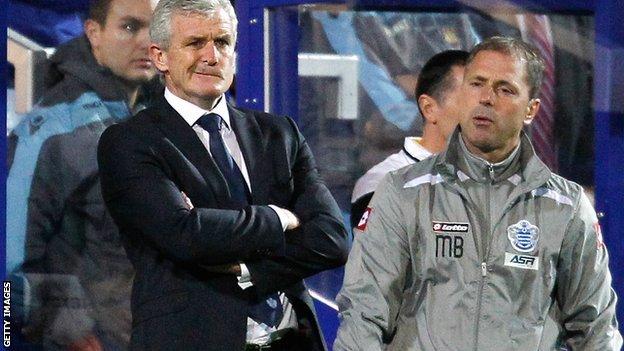 The team are without a league win and remain bottom of the table after their 10 men lost 2-1 to West Ham on Monday.

"Keep calm. Six games does not make a season. I have learnt from many wise chairmen," said Fernandes in reply to a supporter on his Twitter account.

He added: "Mark will sort it out. Look at his record. We would have won if we didn't go down to 10."

"This will make us stronger. Along the way to success there will be bumps. I love what we are building and I love being a Ranger."

Hughes is not overly worried by their poor form, which has yielded just two points from six matches despite recruiting 12 players in the summer.

"We are not adrift. We have had a difficult run but we have played some quality sides," the 48-year-old Welshman said.

"Those things are going against us at the moment. We need to do better leading up to goals. We need to stop crosses at source, get up against people better and stop things happening before they do."

Hughes, who took over at the Loftus Road club in January from Neil Warnock, was asked whether he is confident he will get time to see the job through.

"I would think so. We have had a big investment and we're looking to improve this year and we will," said the former Blackburn, Fulham and Manchester City boss.

"It is very, very early days but until we get positive results on the board then obviously everything is up for debate and a focus begins to come on the club as a whole."

Fernandes said he expected the side to improve when injured players returned to the team.

"I'm calm and want to build stability which is what most fans want. There are many out there who are clueless," he said.

"I am relaxed and confident. Let's get all our players back and in form and fit and then let's see."

West Ham dominated the midfield areas, taking a 2-0 lead at half-time thanks to goals from Matt Jarvis and Ricardo Vaz Te, before Adel Taarabt cut the deficit.

And Hughes said that, although his side had improved after half-time, the dismissal of midfielder Samba Diakite for a second bookable offence had effectively ended their challenge.

"We were very poor, certainly in the first half when we were second to every ball," Hughes added.

"In the second half we made a better fist of it. In fact when Adel scored a great goal that got us a little bit of momentum. At that point I could see us getting a second goal.

"The sending off completely killed that momentum."

West Ham captain Kevin Nolan was at the heart of the victory and spoke of the importance of the club's first away win of the season, a victory which moves them into seventh in the Premier League table.

"It was absolutely vital. I am delighted with the win," Nolan said. "They made us work for it in the second half. It was a fantastic first-half performance and in the second half I thought we dug in and we could have won it by more in the end. But we proved we are tough to beat and we have quality."