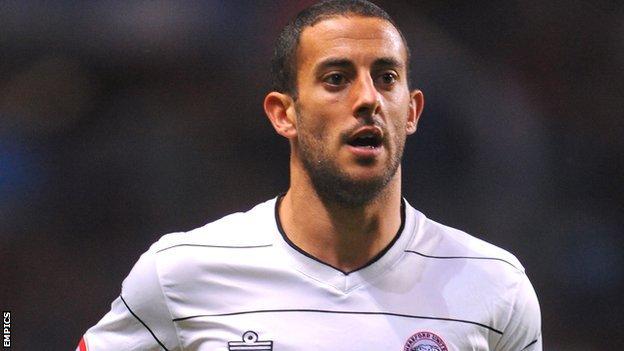 The visitors went ahead as Dan Holman curled a shot into the top corner before Luton striker Stuart Fleetwood was sent off for two bookable offences.

Braintree doubled their lead when Sean Marks chased on to a ball over the top from Sam Habergham and fired home.

Luton's Simon Ainge headed in a Jake Howells corner and Dan Walker levelled with a low effort but the Iron won it through Matt Paine's header.

Fleetwood was shown two yellow cards, his first for an alleged dive and his second for a foul on Nicky Symons, as Luton played the last 62 minutes with only 10 players.

Despite this, the Hatters fought back from 2-0 behind to make it 2-2 before Paine nodded in the winner from Daniel Sparkes's corner.

"We should enjoy this occasion, it's probably the best result in Braintree's history, I'd imagine.

"We came here to enjoy it, no-one expected us to get a result here, and we've ended up winning.

"We've been positive - you've seen our defending, so we have to attack to win games.

"I thought we fully deserved the win, it's a great result for us, hopefully we can kick on now."