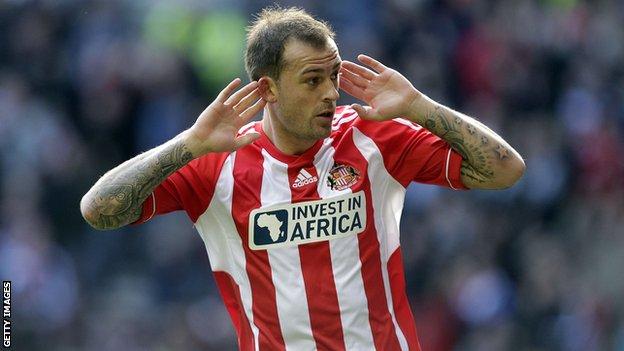 Sunderland should not keep relying on Steven Fletcher to score, according to defender John O'Shea.

The striker has netted all five of the Black Cats' Premier League goals this season since his transfer from Wolves.

"Fletcher has obviously been on fire, he's been amazing for us. We have to give him a lot more support," O'Shea told BBC Newcastle.

We're confident in the players that we have, the management have been fantastic in bedding in the new lads to give them the confidence to perform.

"It would be great if he does bang in 30 goals for us, but the pressure's on the rest of us."

Fletcher's impressive club form has seen him earn a recall to the Scotland international squad for the first time since February 2011.

However, Republic of Ireland international O'Shea says that the rest of the squad are working hard to find their goalscoring touch.

"We should be scoring more goals from set pieces," he said.

"It's something we are working to improve on and hopefully it does happen as we can't just keep expecting Fletcher to bang in the goals but we are giving him good service."

Sunderland are unbeaten in the Premier League this season, despite having to wait until last weekend against Wigan for a first win.

And O'Shea believes his side can go into Saturday's match at reigning champions Manchester City in a buoyant mood owing to their early season form.

"We can go into it [against Manchester City] with the confidence because we got that win against Wigan and all those good performances away from home," O'Shea said.

"We've got that win on board and can now move forward.

"We're confident in the players that we have, the management have been fantastic in bedding in the new lads to give them the confidence to perform."