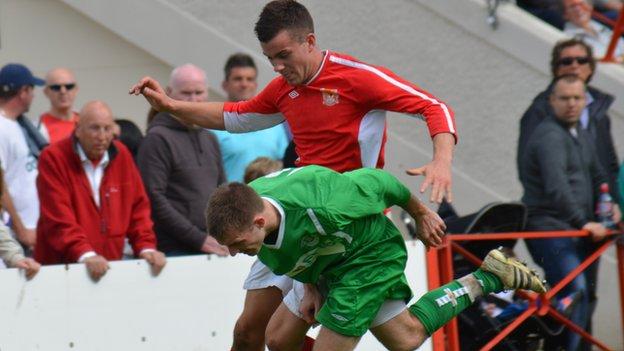 The chief executive of Jersey's FA is encouraged by news that Gibraltar have provisionally been accepted as members of Europe's governing body, Uefa.

Jersey have wanted to join Uefa for a number of years but have been waiting to see whether Gibraltar join Uefa before knowing where they stand.

"I think what's happened with Gibraltar has to be seen as a positive step," David Brookland told BBC South West.

"It's a step in the right direction and that can only be a good thing."

Gibraltar need to have their membership ratified by the Uefa congress next May, a process that went against them in 2007 when member nations voted against the British overseas territory.

Previously, they had been told they could not join Uefa as they were not a country recognised by the United Nations.

"Jersey have got, in some ways, better criteria - but you've always got to go back to this issue of being recognised by the United Nations as an independent state, which we're not," Brookland said.

Gibraltar has a similar constitutional position in relation to Great Britain as Jersey, Guernsey and the Isle of Man, with a Lieutenant Governor acting as the Queen's representative and a local government responsible for organising domestic affairs.

Jersey, along with Guernsey and the Isle of Man, travelled to Gibraltar in the summer to play a four-team tournament.

It was eventually won by the home side after

Jersey and Gibraltar have also played each other eight times, with Jersey winning five, drawing once and losing twice.

In terms of population, Jersey is bigger than Gibraltar and Uefa members Liechtenstein, San Marino, Andorra and Faroe Islands with about 90,000 inhabitants.

And although the island's team will represent England in the in San Marino in March, they other than the annual Muratti match with Guernsey.

If Gibraltar and Jersey became members of Uefa, Brookland believes a tournament among some of the smaller sides would be more beneficial rather than playing World Cup and European Championship qualifiers and, in all probability, losing most or their matches.

"The direction we've always tried to go through when dealing with Uefa was to try and get some kind of small nations cup in place with some of the small nations such as Andorra, the Faroe Islands, San Marino and let's say Gibraltar, Guernsey and the Isle of Man," he said.

"It would allow those sort of teams, which we believe are of a fairly similar standard and have got a lot of similar criteria, to play in some kind of a European Champions League-type thing where you could play on a home and away basis.

"That's not saying we would have to be admitted in some way, but Uefa recognising that we've all got similar characteristics and that would be a good kind of tournament to play.

"All we've ever wanted was to try and find a basis to play competitive football on a more regular basis and some kind of European small nations cup would be a good route to go."