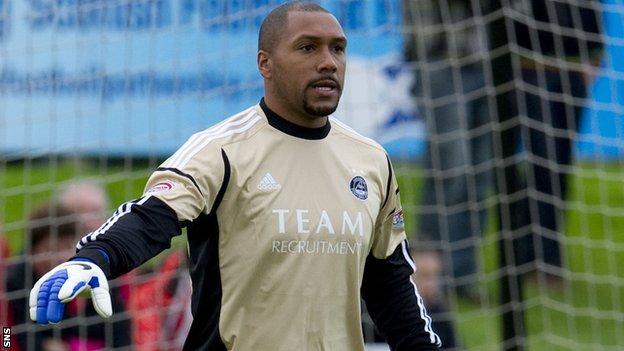 Neville Southall believes Wales will be in safe hands with Jason Brown in goal for the next two World Cup qualifiers.

Injury has deprived Wales of first-choice Wayne Hennessey and deputy Boaz Myhill against Scotland and Croatia.

Brown has not played this season for Aberdeen, but Southall believes Wales need an experienced figure in goal.

"He's been around a long time and I think it'll be a better transition for the defenders," said Southall, who won a record 92 caps in goal for Wales.

"Wales is a team full of kids, really, and they have missed having a senior player.

"Jason's an old head and he's got that bit of experience that might help a few of the defenders in front of him. He'll have a stronger voice in the dressing room.

"I'd go for Jason, purely on his experience for these games."

Brown's last match was Wales' 2-0 defeat to Mexico in a friendly in May.

That followed a season as the first-choice stopper for a struggling Aberdeen side in the Scottish Premier League, but the 30-year-old has been dislodged by Jamie Langfield this season.

With Myhill starting in Hennessey's absence, Lewis Price sat on the Wales bench alongside Brown as Wales began their 2014 World Cup qualifying campaign with defeats against Belgium and Serbia.

But Crystal Palace's Price has played only four games since February, leaving uncapped Tranmere Rovers keeper Owain Fôn Williams as Wales' only option who has been playing regularly.

Southall believes Wales can absorb the loss of Hennessey and Myhill, confident that none of the other contenders would "let Wales down".

But he ranks Wolves' Hennessey in a different class to his colleagues and believes a career with one of the leading Premier League clubs is within his grasp after recovering from a knee injury.

"I'm not sure about Owain because I haven't seen enough of him, but the others are way behind Wayne Hennessey," said Southall, who won European and domestic honours with Everton.

"I haven't heard of any Premier League team trying to buy them. I still think that Wayne has got the potential to be one of the best goalkeepers in the world.

"It's unfortunate he's had this injury, but that might have given him time to reflect on what he has achieved and what he wants to achieve.

"He needs to get back into the Wolves team, play well and then hopefully he'll move to a bigger club."

Scotland will be searching for their first victory in the current qualifying campaign when they face Wales in Cardiff on 12 October.

And despite the goalkeeping dilemma facing Wales manager Chris Coleman, Southall is confident of a home win.

"I do think you'll see the real Wales team turn up this time," he said.

"The Scotland team doesn't frighten me, and Wales are due a result.

"They owe it to the Welsh public and I think they will be doubly determined to get a victory. I don't see why they shouldn't get it."