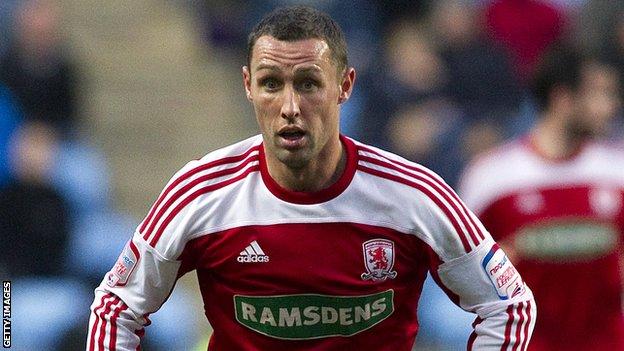 The 29-year-old Australia international has been absent from the Boro teamsheet in every game so far this season.

"There was only one chat needed with Scott, I think we put a few things to bed and we are all getting on with it like adults," Mowbray told BBC Tees.

"Scott over the next few weeks might be brought back into the fray, but he'll have work to do."

The forward scored nine times for the Teessiders last season but found himself out of favour this campaign, the reason for which Mowbray has refused to disclose.

And Mowbray warned that McDonald has a lot to do if he wants to displace those who have played up front so far this season, including Lukas Jutkiewicz and academy graduate Luke Williams.

"Other players have been working extremely hard to try and make an impact in the team and they will get opportunities to play in front of him," he added.

"I don't think Marvin will be too long, he's got some bruising on his foot. It's not a ligament or a surgical situation," added Mowbray.

"I've had a good chat with him today, and he didn't train with the group. We will probably leave him out over the next few days."

You can listen to the full interview with Tony Mowbray on BBC Tees Sport from 18:00 BST on Wednesday 3 October.