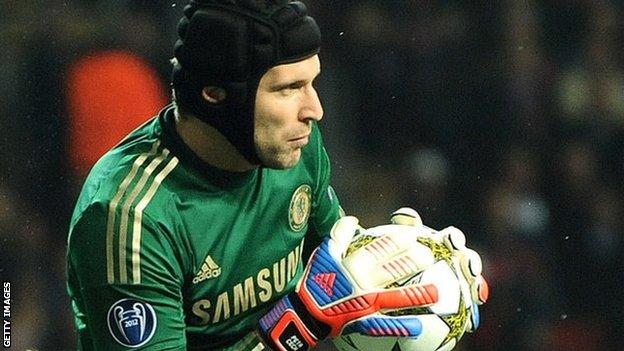 Chelsea manager Roberto Di Matteo pinpointed a Petr Cech save as the key moment in the 4-0 Champions League win at FC Nordsjaelland.

His fingertip stop diverted a Joshua John shot on to the post with reigning champions Chelsea under pressure despite leading 1-0 in Denmark.

"We were looking for that second goal to close the game off," said Di Matteo.

"They had one good chance with Petr's crucial save, and a couple of half-decent chances."

Chelsea on the road

Juan Mata gave Chelsea the lead before Nordsjaelland almost made Chelsea pay for a number of missed chances.

A superb David Luiz free-kick eased Chelsea nerves before Mata and Ramires added late goals to give the scoreline a flattering look.

"We expected a difficult game and that's exactly how it turned out to be," added Di Matteo.

"We were a bit slow out of the blocks, even if we had chances to score. We scored one and had a couple of other chances.

"The second goal was important for us, to settle us down. We were sharper and better in the second half, and once we scored that second goal we knew we'd win the game.

"They play, no matter what, their football and it's not easy.

"There are no pushovers in the Champions League - look at Bayern [Munich] losing, and [Manchester] United having to come back."

"It just shows exactly what I thought about the group," said Di Matteo, whose team face Shakhtar on Tuesday, 23 October.

"The Ukrainian champions are a very good team, and it's going to be hard for us to qualify.

"It was important to win [against Nordsjaelland]. The scoreline shows four goals scored and none conceded, so that's pleasing."