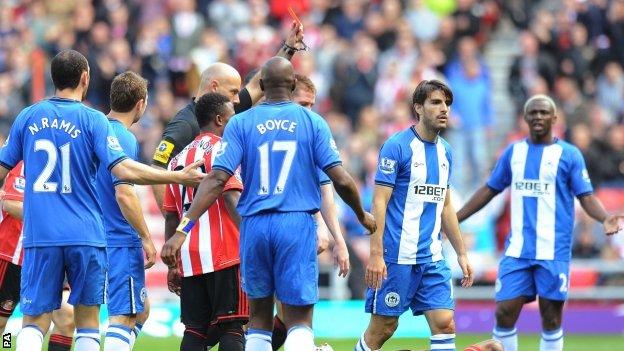 Wigan midfielder Jordi Gomez has had his sending-off at Sunderland at the weekend overturned.

Gomez, 27, was shown a straight red card for a foul on Danny Rose

Wigan boss Roberto Martinez felt that the challenge was not two-footed and Gomez did not deserve to be dismissed.

A Football Association statement said: "The three-match suspension handed to the player has been withdrawn with immediate effect."

Speaking after Saturday's match, Martinez told BBC Sport: "The complaint is that Danny Rose has a heavy touch and the ball is there to be won.

"Both players challenged for it and while Jordi leads with his studs he has only one leg off the ground.

"If the referee sees that as a red then you expect the same for both teams and Seb Larsson's challenge on Arouna Kone later on was even more reckless."

Gomez will now be available for Saturday's visit of Everton.