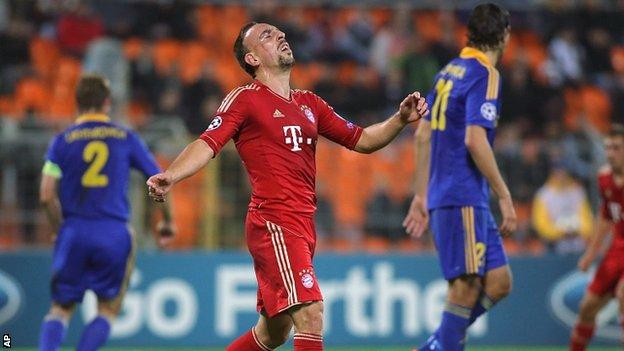 Bayern Munich's perfect start to the season ended with a shock loss at BATE Borisov in Champions League Group F.

The 2011 finalists, who won their first 10 matches in all competitions, lost 3-1 as BATE stayed top, with Valencia second after beating Lille.

There were no such problems for Group G leaders Barcelona at Benfica, but the Spaniards lost captain Carles Puyol to an awful-looking arm injury.

Shakhtar Donetsk sat top of the group at the start of the day and it seemed they would consolidate that position when Alex Teixeira powered them into a first-half lead at Juventus.

But Leonardo Bonucci scored with a first-time finish from Andrea Pirlo's corner as the Italians hit straight back and it finished 1-1.

Bayern Munich had never lost their second match in the Champions League group stages, but that record was shattered by BATE Borisov.

We give you all our support @Carles5Puyol, you are one of the strongest person I ever met, you will come back soon my friend! #AnimsPuyi

The four-time champions from Germany fell behind to a low finish by Aleksandr Pavlov in Belarus.

That makes it six points from a possible six for the Belarusians, who are three clear of Valencia - 2-0 winners at home to bottom-placed 10-man Lille - and the Spaniards lead Bayern on goal difference.

put the Scottish champions top of the group for a short time, but they were bumped into second when Barcelona prevailed 2-0 at Estadio da Luz.

Barca's fifth straight win over Benfica was orchestrated by Lionel Messi, the Argentine crossing for Alexis Sanchez to poke in an early opener before feeding Cesc Fabregas to make it two after half-time.

The four-time champions have now won their last seven group stage matches, but the night ended on a sour note for them as captain Puyol left the pitch in distress after a terrible fall and Sergio Busquets was sent off following a clash with Maxi Pereira.

With 15 of their 19 Champions League wins coming at home, Galatasaray were expected to deal with the threat of Braga and apply pressure on group favourites Manchester United.

But the Portuguese side took a first-half lead through Ruben Micael's first-half tap-in and doubled their advantage on 94 minutes when captain Alan converted Eder's centre.

Braga, now unbeaten in seven matches on their travels, find themselves third in Group H behind CFR Cluj on goal difference and leaders Manchester, who