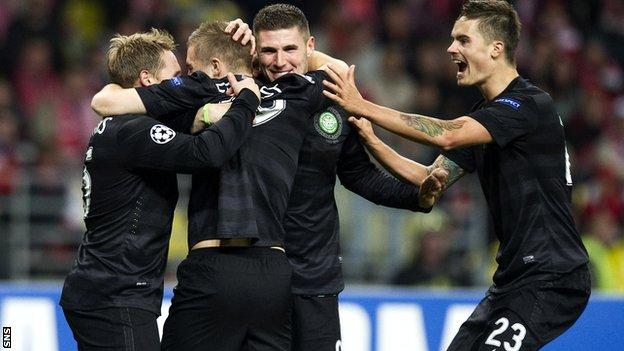 "I cannot speak highly enough of the players, they were magnificent," he enthused.

"They showed great character and fortitude to come back after going behind just after half-time.

"People underestimate Celtic. I don't think we get the respect we deserve but that might change a few attitudes."

An injury-time header from Greek striker Georgios Samaras gave Celtic their first ever away win in the group stages of the Champions League.

Gary Hooper put the visitors in front on 12 minutes before Emmanuel Emenike scored for Spartak with close-range finishes either side of the interval.

After Spartak defender Juan Insaurralde was sent off on 63 minutes for a cynical trip on Hooper, Celtic levelled 10 minutes later when a strike from substitute James Forrest rebounded in off Dmitri Kombarov.

Then Samaras found the net late on to give the Scottish Premier League side a famous victory.

"I thought we thoroughly deserved to win it," said Lennon. "We didn't start particularly well, we looked a bit nervous and our passing wasn't there for the first five or 10 minutes, but we scored a good goal.

"I thought Gary Hooper was world class tonight. I thought he was just magnificent and the catalyst for a lot of good things we did.

"People keep asking me about him playing for England. Well, I think he showed how good he is."

Lennon was also keen to praise the rest of his players, but he insisted qualification for the knock-out stages was still a tough ask.

"It is our first away win in the Champions League, so we have broken a record," he said. "It is fantastic, but there is a lot of football to be played in the group."

Celtic's next two games are against Spanish giants Barcelona, the first taking place at Camp Nou on 23 October.

"It is still an open group for second place as far as I am concerned," said Lennon. "We are still novices in this tournament, but a few more performances like that wouldn't do us any harm at all."