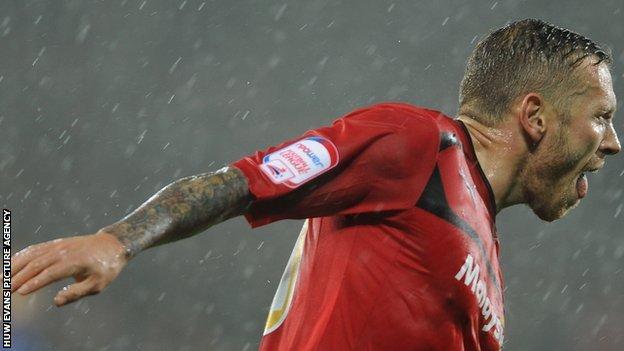 Manager Malky Mackay believes Cardiff City could have trebled their winning score in the historic 2-1 win over Birmingham.

Victory left the Bluebirds celebrating their best home league run in 66 years and top of the Championship.

"We had four or five chances flashing across their goals that we should have despatched and made it a comfortable last 20 minutes," said Mackay.

Both [Craig Bellamy's] calves tightened up. I'm not surprised [after] the amount of running he did

Bellamy hit home in the 37th minute and, after Leroy Lita levelled, skipper Hudson struck the winner in the 57th minute.

"I'm not surprised [after] the amount of running he did.

Hudson's goal was prompted by Peter Whittingham's cross and Mackay was unsurprised at the "aggressive" manner in which the Cardiff captain took his chance.

"I expect that from our centre-backs at set pieces," said Mackay.

"It was always going to be a tough game... and on another day I think that we'd have had four or five more chances that we'd have despatched and made life a little bit easier.

"The work-rate made the difference, starting at Craig Bellamy at centre forward and working all the way back, closing down and pressing teams.

"Overall I thought the quality was great.

"We got into wide areas well, high up the pitch and you saw them hitting balls that flashed across the six-yard box.

"And I think we put our foot on the gas again after it went back to 1-1.

"But on another night we should have been out of sight.

"We had four or five chances flashing across their goals that we should have despatched and made it a comfortable last 20 minutes, as opposed to where a hopeful ball into our box could have caused a problem.

"It didn't because we defended resiliently and we broke at the other end."