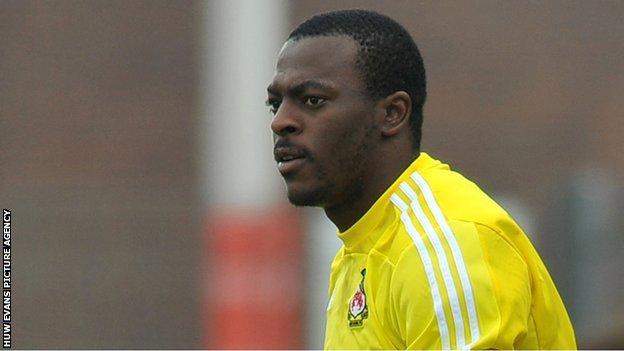 Wrexham goalkeeper Joslain Mayebi has been called into Cameroon's squad for a 2013 Africa Cup of Nations qualifier.

Mayebi, who turns 26 this month, is one of three goalkeepers in the Indomitable Lions squad for the game against the Cape Verde Islands on 14 October.

First choice Carlos Kameni of Malaga and Nancy's Guy N'Dy Assembe are the other two stoppers for Cameroon.

Mayebi will play against Forest Green Rovers but will then miss games against Stockport County and Lincoln City.

Wrexham player-manager Andy Morrell told the Daily Post that Mayebi's call-up was deserved but was a blow for their Blue Square Bet Premier campaign, with the Dragons currently third.

"I'm not saying it's not good for him [Mayebi] so he's got to go, but it's frustrating for us," Morrell.

Andy Coughlin will have to come in and play, he's done great and he deserves the opportunity

"They [Cameroon] are 2-0 down so I think the coach wants to shake it up a bit. It's good for the club, but it means a week away and it doesn't help us."

"Andy will have to come in and play," said Morrell.

"He's done great and he deserves the opportunity. He's come on leaps and bounds in training in this first couple of months so he gets his chance and we'll see how it goes.

"He makes a lot of good saves in training, he's great to have about and I've told him that we are pleased with him."

Cameroon beat Guinea-Bissau 2-0 over two legs in their African Cup of Nations first qualifying round.

But the Indomitable Lions trail the Cape Verde Islands 2-0 after the first leg of the second qualifying round and are in danger of missing out on the finals in South Africa next January.

Manager Denis Lavagne was recently sacked only three months into the Frenchman's contract, with Jean-Paul Akono taking over as interim boss.