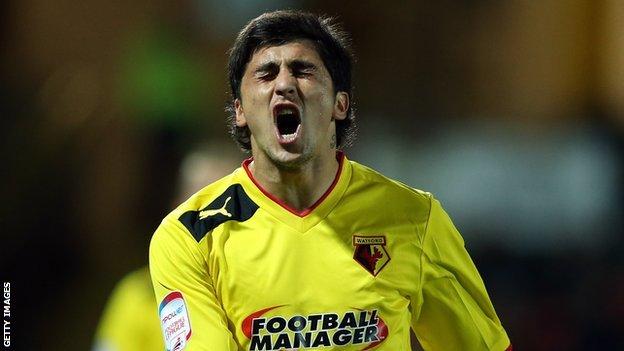 Watford boss Gianfranco Zola has insisted Fernando Forestieri is not a diver and has threatened to drop him should he deliberately go to ground.

The 22-year-old Argentine-born Italian striker was sent off in following a booking for simulation.

"I told him he's not going to play if I find out he's diving."

Zola added: "I don't like that. We want to win games in different ways."

Forestieri, one of 10 players signed has found the net once in his five appearances for the Hornets.

The attacker, who had supplied the corner for youngster Tommie Holban to open the scoring against the Addicks, was dismissed late in the first half when referee Mike Dean adjudged him to have taken a tumble in the box.

But Zola said the fall was down to the type of boots Forestieri was wearing and argued the player's pace had seen him labelled as a diver.

"I spoke to Fernando and he said to me he slipped," said the Italian.

"He always makes the mistake of using the wrong boots. When he played he kept slipping in the first half. So he has to improve that.

"The other team are trying to label him as a diver. The thing is he is quicker than most of the opposition and he gets in front of them.

"He touches the ball and they put him down. It's as simple as that."