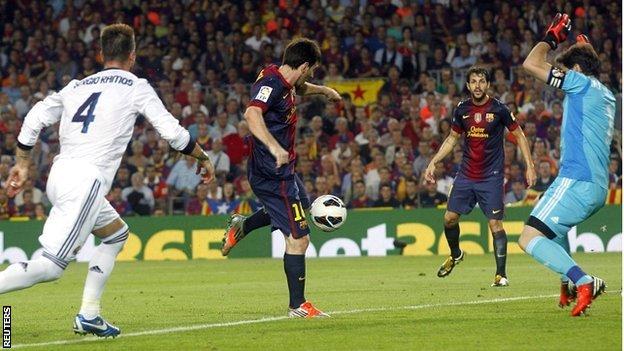 Lionel Messi and Cristiano Ronaldo continued their remarkable goal scoring duel as the pair each scored twice in Barcelona's draw with Real Madrid.

Ronaldo squeezed a shot in at the near post on 23 minutes to set a new record for scoring in consecutive El Clasicos.

Karim Benzema hit the post two minutes later, but Messi got his first after Pepe misjudged a ricochet in the box.

The Argentine scored his 10th of the season from a 25-yard free-kick but Ronaldo tucked in Mesut Ozil's pass.

Martin Montoya, on for Dani Alves, almost won it for the hosts late on when he struck a curling shot against the bar.

And prior to that Messi, 25, could have completed a hat-trick but fired wide following Jordi Alba's cutback.

The game was even tempered compared to recent fiery encounters, and it was the two finest players in world football who made all the headlines as they once again demonstrated their worth to their respective teams.

Ronaldo, who injured his shoulder while attempting an outrageous overhead kick, has now scored in six successive El Clasico fixtures and has collected 14 goals in 11 appearances this season.

And although his double strike left him one short of a hat-trick of hat-tricks, following trebles against Deportivo La Coruna and Ajax in the past seven days, eight goals in a week shows what sort of form he is in after feeling sad at the start of the season.

Meanwhile, Messi's 17 goals in this fixture take him to within one of a mark set by legendary Real Madrid forward Alfredo Di Stefano.

The draw ends Barcelona's 100% league record this season, but it keeps them top of the table and they earned the point without injured centre-backs Carles Puyol and Gerard Pique, while Jose Mourinho's Madrid will perhaps be content with a draw given the hosts' late surge in the game.

Overall it was a pretty fair result with Real starting at a far greater pace than their arch rivals, and before Ronaldo got his first they could easily have scored twice.

Benzema fluffed a great close-range chance, while Sergio Ramos also headed inches wide from a corner. Tito Vilanova's side only managed an Andres Iniesta shot in reply, and shortly afterwards Madrid broke the deadlock via a familiar route.

Sami Khedira fed Benzema in a central position at the edge of the box and with his back to goal the French forward turned to his right, where Ronaldo, 27, took his pass and smashed a shot past Victor Valdes at the near post.

Madrid should have been 2-0 up within two minutes as the ball was fed to Benzema, again unmarked, but he scuffed a shot against the post from 12 yards, with Angel Di Maria missing the follow-up.

Dani Alves had left plenty of room for Ronaldo's goal and the full-back was replaced, clutching his hamstring, by Montoya in a nightmare spell for the hosts.

But Barca were rescued by their saviour as the Real defence made a hash of Pedro's right-wing cross and Messi picked up the loose ball to smash in from six yards.

Both teams had unsuccessful penalty appeals soon after the break as Ozil and and Iniesta, back in the side after injury, were felled.

And as tempers rose, Xabi Alonso was perhaps fortunate not to receive a second yellow card when he chopped down Messi outside the box.

The prolific striker made him pay, though, when he fizzed a dipping and curling free-kick over the wall to send the home fans into raptures.

By this stage Barca were growing in confidence and although Ronaldo beat the offside trap five minutes later to level matters with his eighth goal in eight games against the Catalans, it was the home side who finished the stronger.