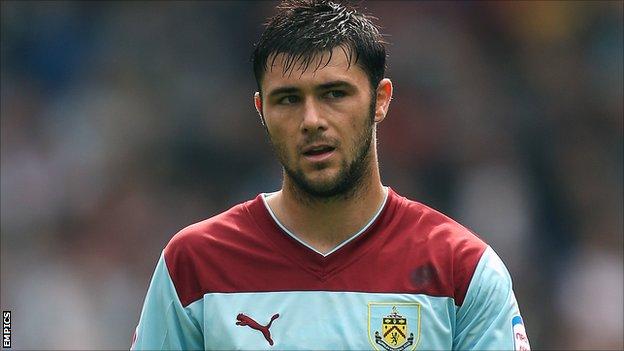 Burnley striker Charlie Austin has paid tribute to his team-mates for helping him become the leading scorer in the country so far this season.

Austin, 23, has scored 14 goals in 11 appearances, including two hat-tricks.

"I say all the time that it's a team effort, and without my team, I wouldn't be scoring these goals," the former Swindon man told BBC Radio Lancashire.

Blackpool (19) are the only Championship club to have scored more league goals than Burnley (18) this season, while only Sheffield Wednesday (20) have conceded more than the Clarets (18)

"I don't really know what to put it down to. I just really want to score goals every time I go on the pitch."

Manager Eddie Howe gave Austin more glowing praise after his treble against Sheffield Wednesday at Turf Moor, although it still was not enough for the Clarets as Michail Antonio's late strike earned the Owls a 3-3 draw.

"He [Austin] looks so confident in front of goal," said Howe. "It's just a shame for him that he can't enjoy his hat-trick because we haven't won the game.

"I don't really want him to train at the moment, just go out and play, because he's certainly doing the business for us on the pitch."

Burnley's inconsistent run of form continued on Tuesday, and the concession of three goals to a side that had lost their previous six Championship matches was particularly frustrating for Howe.

But he is convinced his side can still mount a promotion challenge.

"What I've seen in that changing room in the 15 minutes after the game has made me feel that we've got a real chance of being successful," he added.

"They're such a quiet group but they've stood up tonight and told a few home truths to each other, which is fantastic from my perspective.

"They're a team and we're growing all the time. We've got a team that cares and I'm sure every Burnley supporter will be pleased to hear that."

Meanwhile, teenage defender Jack Errington will not play again this season as he requires surgery to correct a heart problem.

Errington, 17, was found to have an enlarged aorta during routine heart screening of the young players at Turf Moor.

The club have said they hope Errington will be able to resume his career next season.