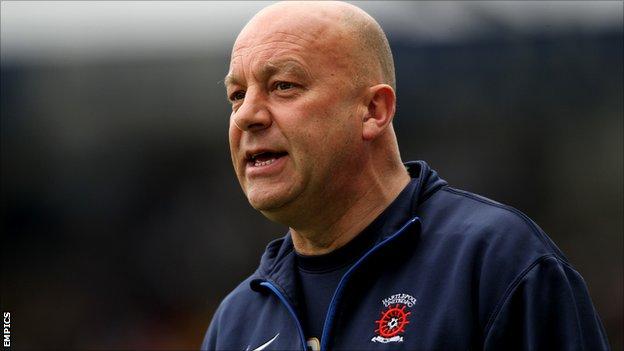 Neale Cooper has called on Hartlepool United to add consistency to their performances after a battling 2-1 defeat by Sheffield United.

Pools were applauded by the home support despite conceding an 89th-minute winner that leaves the club second from bottom in League One.

"If we play like that for the majority of the season we'll climb away from this position," Cooper told BBC Tees.

"The players were immense tonight, we have to keep those performances going."

Cooper's side are now without a win in six games following last month's home win against Scunthorpe United, while players were criticised publicly for defeats by Preston and Colchester.

However sandwiched between have been impressive performances against Bournemouth, Shrewsbury and Tuesday's defeat by the Blades.

"Win or lose, these people like people who will graft, obviously they like to see football being played as well, but if you put in a shift for the people of Hartlepool they'll back you," Cooper continued.

"They're hard but fair, and if they see you working as hard as we did and being positive going forward, they will get behind us."