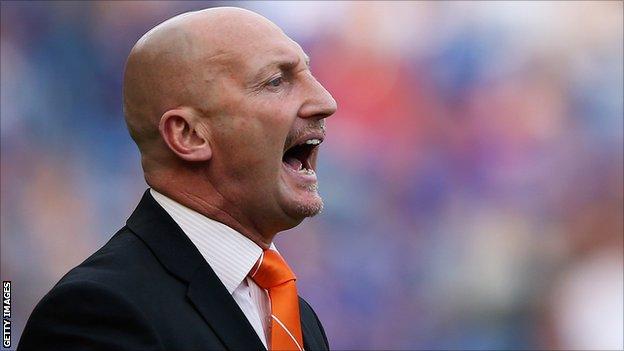 Blackpool manager Ian Holloway says his players showed their fighting spirit to come from a goal down to beat Hull.

The Seasiders trailed 2-1 with 20 minutes remaining, but late goals from substitutes Kevin Phillips and Nouha Dicko

Holloway told BBC Radio Lancashire: "We didn't look like we were going to panic. We stepped up then.

"I felt the longer the game went on, the more chance we had of coming back. We're Blackpool and we keep going."

He continued: "I didn't feel where obviously we were 3-0 down, but it knocked the stuffing out of us and it could have knocked a huge hole in what we're trying to do, but I don't think it did.

"The strength in those bodies, the way we've come on and the way they're feeling all bodes well for their fitness, our togetherness and realising that it's not all doom and gloom if someone scores a goal against you."

Blackpool made a flying start to the season, winning four of their first six matches.

Holloway's side are the top scorers in the Championship so far this season with 19 goals in nine games, although he believes the margins of their previous victories may have a negative effect on the mindset of his players.

"We're almost thinking we're going to steamroller teams with our passing and that's not the case," said Holloway.

"We've got to learn how tough this is, and maybe the way we've won some games has got a few people carried away.