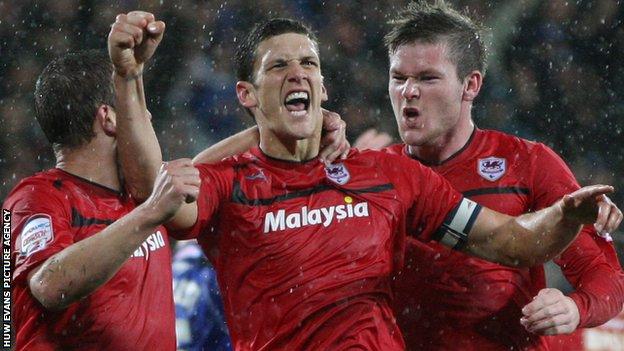 Captain Mark Hudson says Cardiff City must deal with the pressure of being Championship leaders.

A fifth successive home win on Tuesday took Hudson's men to the summit for the first time since the opening night of the season.

Cardiff have often occupied top spot in recent seasons, only to lose ground and ultimately fail in the play-offs.

"Everyone's going to try to beat us because we're top of the league at the moment," said Hudson.

"But teams are also going to be fearing us because of the way we're playing at the moment, which is great. That's the standard we've got to keep."

Before the opening Championship fixture, Hudson claimed Cardiff's squad was now the strongest it has been since he joined the club from Charlton in 2009.

Nineteen points from their opening nine games, which includes five successive home wins, has reinforced Hudson's view that this season represents their best chance of promotion for many years.

"Everyone's fighting for their place and fighting to keep us at the top of the league," added 30-year-old Hudson.

"We'll keep continuing to do that. We're top and that's something we need to hold onto now.

"It gives us that aim. We've had a good start but we've got another tough game to come at Ipswich and a lot of travelling to do."

Centre-back Hudson played an unfamiliar role on Tuesday as he created Cardiff's first goal for Craig Bellamy and then scored the winner after Birmingham had equalised.

After an early-season injury, Bellamy has now started three games in a row and Hudson hailed the striker's overall impact at the club since his arrival in August.

"He's been brilliant since he's come in," said Hudson.

"The way he talks to everyone and the younger players - everyone looks up to him. He's a leader off the field as well and he's helping us to be where we need to be.

"He works his socks off and he does that in training as well. I've got nothing but high praise for him."