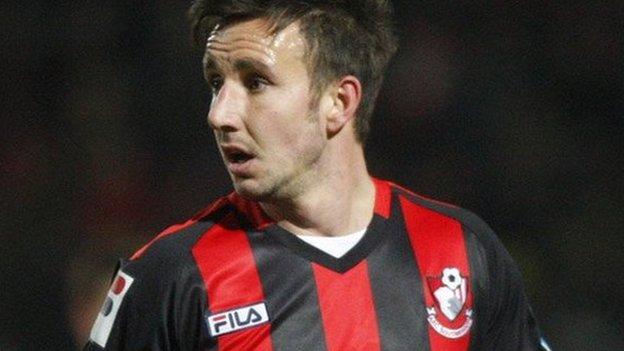 Bournemouth striker Matt Tubbs has urged supporters and players to stick together as the club try to address their worrying slump in form.

The Cherries were beaten 3-1 by Crawley on Tuesday and have won just once in the league this season.

Fans have called for manager Paul Groves to be sacked but Bournemouth's record signing has called for patience.

"I would urge them [fans] to stick with it and it will come good," Tubbs told BBC Radio Solent.

Groves has vowed that he will not walk away from his position, saying: "In football you don't quit. Never quit on the pitch, never quit off the pitch."

And Tubbs has stressed, despite reports of dressing-room unrest, that Groves still has the support of the players.

"We've got the capabilities [to turn it around], it may come across that things are bad, but on a personal note it's not," he said.

"We will stick together and if we do that then hopefully we will creep up the table."

Bournemouth invested heavily in the summer and were tipped for a promotion push this season.

But Tubbs says it will take time for the squad to bond and reach an understanding.

"With the squad we've got we shouldn't be here [20th in the League One table]. It's a false position but we need to put the hard work it to get the right results," he said.

"There is building process, you can't expect a relatively new squad of 30 players to gel straight away so it's moving on slowly and hopefully sooner rather than later we will turn it around."