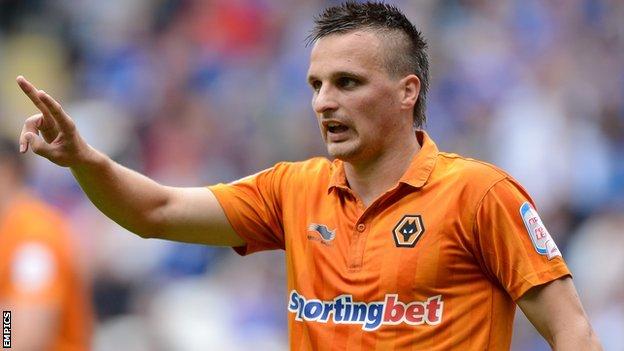 Wolves have confirmed that summer loan signing Slawomir Peszko will be out for up to six weeks, just three days after losing fellow winger Razak Boukari.

"It's not good news," boss Stale Solbakken told BBC WM. "His ligament is stretched. He will be out a long time."

Boukari, 25, is also out for up to six weeks after suffering a calf injury in the

Saturday's game against Blackburn is not easy. But we can take a point from any team and we will try to fight them

"Both of them will be out for a while and that's not positive for us," Solbakken added.

"That is the second game for us that a wide player is injured and that makes us a little bit vulnerable in that area.

"We are short in that department. We will see what we do."

Wolves are also without fellow midfielder Stephen Hunt, who is awaiting surgery on a troublesome hip problem.

As for the fairness of Palace midfielder Jonathan Williams' challenge on Peszko, Solbakken said: "I was too long away from it. I can't comment on that."

After seeing his side's four-match winning Championship run come to an end courtesy of two goals from much-coveted Palace youngster Wilfried Zaha, Solbakken is looking ahead to Saturday's game at managerless Blackburn.

"The game against Blackburn is not easy," he said. "But we can take a point from any team and we will try to fight them."