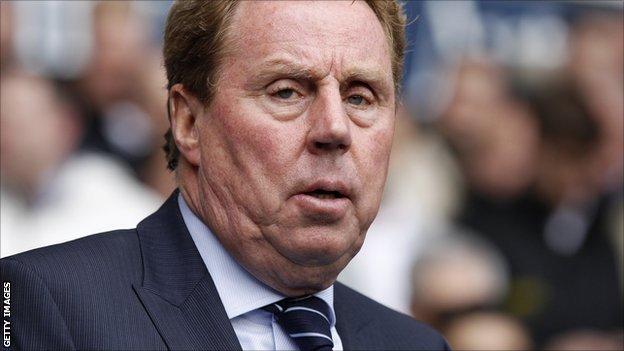 Harry Redknapp says there is "not a chance" of him succeeding Paul Groves as Bournemouth manager.

The former Spurs boss is currently working for the club as an advisor.

"Not a chance, not a prayer. That is definitely not on my agenda," said Redknapp when asked if he would consider taking the job.

"I was asked if I would get a little bit involved, but I haven't really, to be honest," the 65-year-old told BBC Radio 5 live.

"All I have done is watch two or three games. I love the club - they are my local club and I really want to see them succeed," he added.

Redknapp managed Bournemouth from 1983 to 1992, before moving to West Ham. He has had three other spells managing on the south coast, leaving Portsmouth to take over at Southampton in 2004 before returning to Fratton Park a year later.

Groves lost his job as Bournemouth manager on Wednesday, along with assistant Shaun Brooks, after winning just one league game this season.

"In my opinion, they have lost two good people in Paul Groves and Shaun Brooks," added Redknapp.

"I hope that the club makes a good appointment, because the club has got good potential. It is a really good little football club, but it is certainly not a job that would interest me, no."

"There is no truth that I have offered him the job," chairman Eddie Mitchell had earlier told BBC South. "His future is a lot higher, we are a Division One club."

Mitchell, who confirmed he has offered Groves and assistant manager Shaun Brooks a role with the youth team, added he was "saddened" by the decision but vowed to help turn things around on and off the pitch.

"I've got no intention of walking away from this challenge myself," said Mitchell. "I want the best for this football club."

Groves, who was appointed permanently in May after taking over as caretaker in March, won just one league game this season and only earned 18 points out of a possible 54 during his tenure.

First-team coach Dennis Rofe looks set to take charge of the team on Saturday, but several names, including Steve Cotterill, Steve Coppell, Eddie Howe, Gary Johnson and Glenn Hoddle, have also been linked to the job.