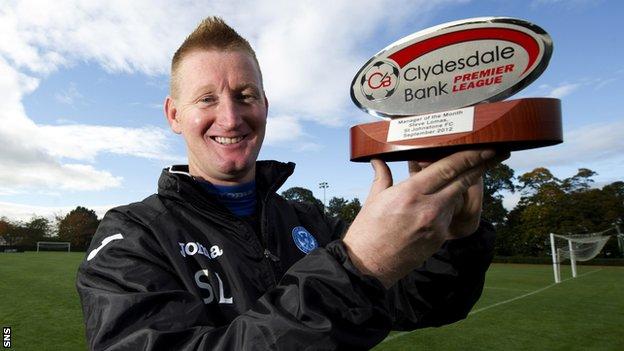 St Johnstone's five-game unbeaten run during September has led to Steve Lomas being voted manager of the month.

The 38-year-old Northern Irishman received his Clydesdale Bank Premier League award after Saints ended the month with a 3-1 win away to Dundee.

That lifted the Perth side to seventh in the table, three points behind leaders Celtic.

Saints also beat the reigning champions 2-1 at McDiarmid Park, one of four straight victories during the month.

Obviously the Celtic game was a massive boost

Lomas' side started September with a 0-0 draw at home to Dundee United but then defeated Celtic, Ross County and Queen's Park, in the Scottish Communities League Cup, before winning the Tayside derby at Dens Park.

The Northern Irishman said: "It's fantastic, but obviously you are really picking it up on behalf of the lads and the way they have gone about their jobs.

"Long may it continue and hopefully it's not the dreaded curse because we have a massive game on Saturday against a St Mirren side who are scoring a lot of goals."

Saints had gone 12 SPL matches without a win before recovering from an early Kris Commons goal to beat Celtic 2-1.

"I don't think it's remarkable," insisted Lomas. "The first six games I thought our performances deserved more points. But, that being said, we didn't get them.

"I was pretty consistent that our performances merited it, apart from the Aberdeen game at home, when we were poor.

"But you like it to turn sooner rather than later because results breed confidence and there's nothing like getting a win to enjoy your training and looking forward to the next game.

"Obviously the Celtic game was a massive boost to come from behind and get the win and to follow that up with 10 men at Ross County was an equally big boost.

"But it's early in the season. We have got ourselves into a good platform, but it's so tight in the SPL, a couple of losses and you are back down in it, and a couple of wins and you are looking up.

"That's the beauty of this year, everybody can beat everybody, which makes things exciting. Tough for a punter to pick a bet."