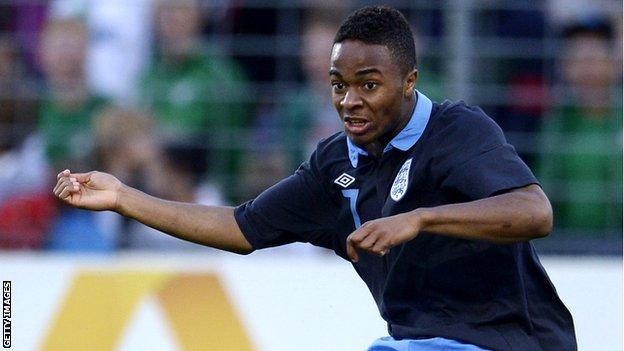 Liverpool winger Raheem Sterling has received his first call-up to the England Under-21s.

He was a late inclusion in the England senior squad in September for the World Cup qualifier against Ukraine at Wembley, but did not feature.

The Under-21s face Serbia in a Euro 2013 play-off in Norwich next week.

The 17-year-old has made eight appearances for Brendan Rodgers' side this term and has represented his country at U16s, U17s and U19s level.

As Sterling had been an unused substitute for the senior side in September, there had been suggestions that the teenager would again be picked by Hodgson in his squad announcement on Thursday for the forthcoming qualifier against San Marino on 12 October.

But Under-21s coach Stuart Pearce insisted that Sterling forms part of his plans: "He's been in our development squads and has done extremely well for Liverpool.

"For Raheem to have an insight into the senior team is fantastic. We are pleased to have him."

Full squad for games versus Serbia on 12 and 16 October: