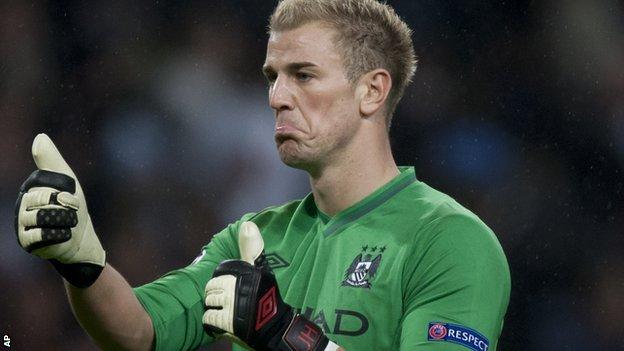 The England keeper made numerous saves before Mario Balotelli's last-minute penalty salvaged a 1-1 draw and earned City their first point of the campaign.

"Joe saved us. He did well," said boss Mancini. "We deserved to concede three or four goals. We didn't play well."

Balotelli's goal means City, who lost their opening game 3-2 to Real Madrid, are third in Group D with one point from their two matches.

Joe Hart has now made 13 saves in the Champions League this season, only Cluj's Mario Felgueiras (14) has made more.

City were outplayed for much of the match and Hart had little chance when Marco Reus capitalised on an error by Jack Rodwell to give the German side the lead.

"We weren't great. We were a bit open at the back," said Hart.

"They are a very good side. A lot of respect to them. It is open. Real smashed Ajax so it makes that game [for City] big in Amsterdam. These nights create drama. You could stick any side out there: my old side Shrewsbury under the lights and music; the game's played differently."

But he did not think the situation affected the rest of his team-mates.

"We have players we wouldn't have a table big enough to put all their medals on so it doesn't affect them either."

"We have to run and fight," said Mancini. "It's not enough to just pass. Champions League is another situation - different from the championship.

"It's not enough to just have quality."

"We didn't play well because Borussia Dortmund played better than us. They probably, at this moment, are a better team than us.

"If we want to play in the Champions League we have to play better."

City have made an indifferent start to this season after they won the Premier League title at the end of the 2011-2012 campaign, but Mancini is not unduly concerned.

"I know the problem and I will resolve very quickly this problem," he added.