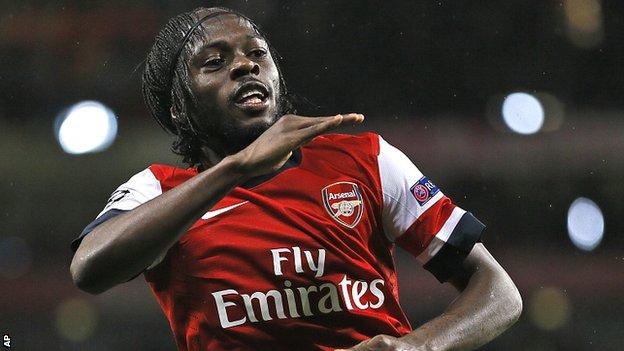 "He is scoring goals so his confidence is sky high," said Bould, in charge as Arsene Wenger served a touchline ban.

"He is a danger with his pace and movement. He could be a top player."

Gervinho put Arsenal ahead against the Greek champions with a low finish from just outside the penalty area on 42 minutes.

It was his fifth goal in seven matches, one more than he managed in his first season in English football.

The former Lille forward was deployed on the wing last term but five of his appearances this time round have come as the lead striker.

It is similar path to that taken by Arsenal legend Thierry Henry, who scored 228 goals in two spells with the club.

"Well, if he gets anywhere near Thierry Henry we'll take that all day long," said Bould, who felt Gervinho was still "learning his trade" at centre forward.

"I don't think he has played there an awful lot," said Bould, adding: "Good players can play anywhere - left, right, centre forward. He is scoring goals and improving with every game."

Kostas Mitroglou headed Olympiakos level on the stroke of half-time, but strikes from Lukas Podolski and Aaron Ramsey sealed the win.

It moves Arsenal top of Champions League Group B on six points from two games, and helps get out of their system.

"We've won the game, it is a great result for us," said Bould, who said centre-back Per Mertesacker was struck down by a virus on Wednesday morning.

"They were actually very good. Their organisation was excellent and they made it tough for us.

"We improved in the second half with the ball, but we looked a little bit nervy at times and overall we are delighted."

"Even though we didn't play so great, we should have got something from the game," said Bould.

"Maybe there was a little bit of a carry-over, but we're hoping now that we've won that has gone, done and dusted, and we get back on track."