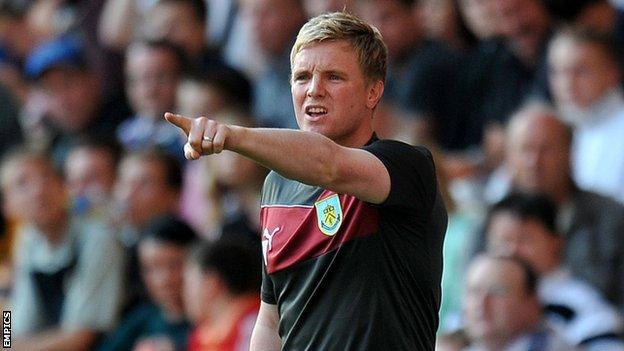 Burnley boss Eddie Howe has distanced himself from speculation linking him with a return to Bournemouth.

The Cherries and Howe, who spent two years as manager before leaving for Turf Moor in 2011, was reportedly a target.

"This is a Bournemouth story and not one I feel I should comment on," said the 34-year-old Clarets manager.

"I am Burnley manager. I still feel we are trying to move forward and there is still a lot of work to do here."

Howe won 51 of his 102 matches in charge of Bournemouth and won promotion to League One with the club in 2010.

Burnley have made a mixed start to the Championship season - they lie 15th in the table with 11 points from their first nine matches.

Clarets chief executive Lee Hoos has said he would not welcome any approach for Howe.

"We are in the process of building for the future with Eddie and his staff and speculation is an unwanted distraction," said Hoos.

Groves paid the price for a poor start to the League One campaign, which saw the Cherries win just one of their first 10 league matches.

First-team coach Dennis Rofe is likely to take charge of the team at Coventry on Saturday, while chairman Eddie Mitchell has being handed the job.

Yeovil manager Gary Johnson has also played down links with the vacant position at Dean Court, after some bookmakers odds came down on him taking the job.

"It's not unwanted [the rumours], but it's not a distraction either," he told BBC Somerset.

"We've got a bit of work to do here and nothing must take our focus away from what we've got to do.

"At this minute everybody needs to be giving 100% and that's what we're all giving."