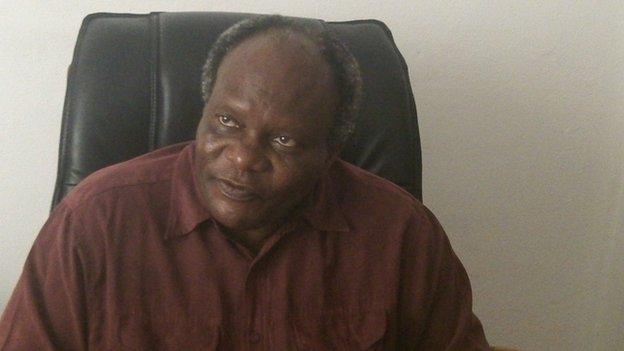 The Cameroon Football Federation (Fecafoot) has chosen not to contest the government's appointment of national coach Jean Paul Akono in order to avoid potential sanctions from Fifa.

As Fecafoot held its ordinary executive meeting, a member told BBC Sport: "When Fifa learnt that the Cameroon government had appointed a coach without involving the federation, it asked questions.

"Cameroon could be sanctioned if the federation is not in support [of the appointment]."

Akono took charge of the Indomitable Lions on 13 September after Denis Lavagne was suspended - and effectively sacked - following the 2-0 defeat by Cape Verde in their 2013 Africa Cup of Nations final-round qualifier first leg on 8 September.

It has now come to light that Akono's appointment was made by Cameroon Sports Minister Adouma Garoua while Fecafoot was meeting in the northern town of Garoua to consider its options.

But Fecafoot executive members have decided to accept the decision.

"The executive committee drums support for the coach Jean Paul Akono and the technical staff," Fecafoot said in a statement read by vice-president John B Ndeh.

"We invite Cameroonians to turn out massively on to egg the indomitable Lions to victory and qualification."

Cameroon host Cape Verde on Sunday, 14 October, seeking to overturn their deficit and book a place in the tournament finals in South Africa next year.