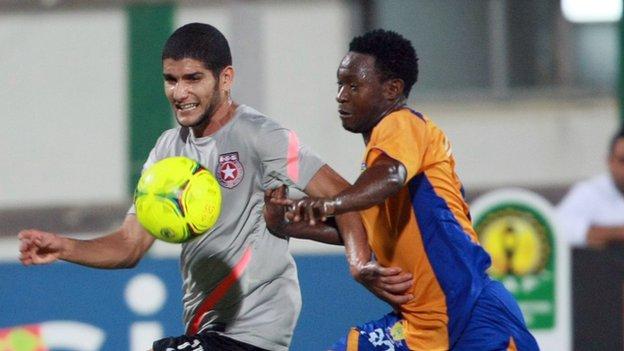 Sunshine Stars go into this weekend's African Champions League semi-finals as the only one of the four clubs to have never won the competition.

The Nigerian side will host six-time winners Al Ahly of Egypt in south-western town Ijebu Ode on Saturday for the first leg of their tie.

On Sunday, 2010 finalists and four-time champions TP Mazembe of DR Congo will meet Tunisia's Esperance, who have won the title twice.

Sunshine and Ahly will be facing each other for the first time in the clubs' histories.

Both sides go into the tie with concerns about rustiness with the Nigerian league finishing early last month and domestic football banned in Egypt since the Port Said tragedy Port Said in February.

Ahly have been hard hit by injuries and they will be without star striker Emad Moteab, who is suffering from kidney stones, and midfielder Walid Soliman has been ruled out because of a knee problem.

Moteab was part of the 2005, 2006 and 2008 Champions League-winning teams and his predatory instincts will be sorely missed by a team that has found goals hard to come by apart from a 4-1 home triumph over Berekum Chelsea of Ghana.

In contrast, Sunshine will be looking to their leading scorer in this season's Champions League, Izu Azuka, to add to his five goals so far.

And it could be that the competition is Azuka's swan-song as the forward is reportedly set to join Esperance next year as a replacement for Switzerland-bound Cameroonian Yannick Ndjeng.

Confidence appears to be high in the Nigerian camp with midfielder Sunday Emmanuel predicting a 3-0 victory over Ahly, who have seldom found the going easy against Nigerian rivals.

In the other tie, Mazembe and reigning champions Esperance know each other extremely well having met four times two seasons ago.

Each side won at home during the pool stage before Mazembe humiliated 10-man Esperance 5-0 in the first leg of the final and rendered the drawn return match largely meaningless.

This season, both Mazembe and Esperance lost their last group matches. The Congolese went down 1-0 at Berekum - a result that allowed Ahly to overtake them in the final standings - and the Tunisians slipped1-0 at ASO Chlef of Algeria.

The result in Algeria had no impact on the standings in the other pool, but it did end a 19-match unbeaten Champions League run by the Tunis club, leaving them to share the record with Ahly.

Captain Tresor Mputu and Tanzania-born Mbwana Samata have scored six goals each for Mazembe en route to the semi-finals while Youssef Msakni with four and Ndjeng with three are the chief Esperance marksmen.

The second legs of the semi-finals will be played in Tunisia on 20 October and in Egypt one day later.

The final will also be played over two legs, on the weekends of 2-4 November and 16-18 November.

Originally scheduled for the weekend of 9-11 November, the second leg of the final was moved to avoid a clash with the final of the African Women Championship.