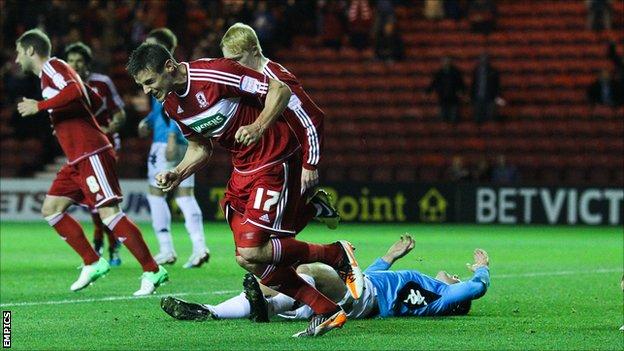 Middlesbrough manager Tony Mowbray says he understands the frustrations vented by supporters during games, but will not waver from a patient style of play.

Boro drew 2-2 at home to Derby on Wednesday, amid audible crowd disapproval during spells of the game.

"There's a balance between keeping the ball and having a threat, but I don't see a long ball off the centre forward taking anybody anywhere."

Mowbray added: "I understand fans wanting the ball punted up to the strikers, but if it keeps breaking down and they break on you it's also disappointing when the ball ends up in your net.

"We'd rather keep the ball and let the opposition get frustrated than them keep attacking on the changeover of possession."

Wednesday's draw came at a cost for the Teessiders, as Morocco playmaker Merouane Zemmama joined a growing injury list at the Riverside.

"I'm conscious of not standing here and making excuses, but our two centre-halves from the start of the season are unavailable, and you'd have to say five attack-minded players are also out for us," Mowbray continued.

"So maybe that's evident to see, by the balance of the midfield, the strikers, [Ishmael] Miller's speed, power and pace, [Marvin] Emnes' ability to hold the ball and drive forward and young [Adam] Reach.

"We knew that though, we came here hoping to win the match, as we did on Saturday, and didn't see the job through."