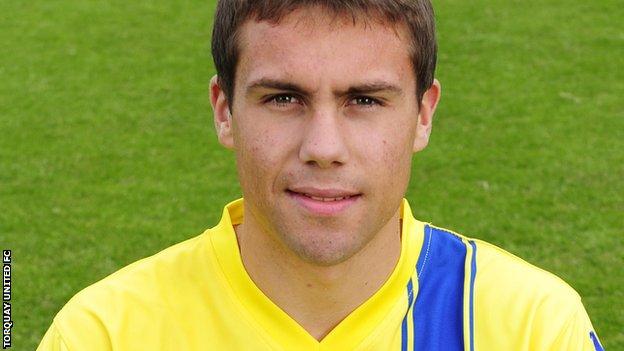 Torquay striker Ashley Yeoman hopes he can get more playing time after scoring his first goal for the club.

The 20-year-old got the equaliser in the in only his third league appearance.

"I haven't had much game time so it came as a bit of a surprise that I got it so early. I can't really believe that I've got it," he told BBC South West Sport.

"I didn't see it go in as I flicked it on, I just heard the crowd roar."

A 16-year-old Yeoman made his debut for the Gulls as a substitute in a 1-1 draw with Oxford in the Blue Square Premier back in October 2008.

But had to wait three and a half years for his next game as he came off the bench in a loss to Bradford in February.

He signed a and this season he has come off the bench in the 4-0 loss to Leicester in the Capital One Cup before scoring on Tuesday.

And he hopes the goal is the springboard he needs to push towards more first-team appearances.

"It's what every footballer wants to do, play, and you're only going to improve by playing more games," he said.

"You get seen when you're playing and it's not good being sat on the bench because you're not going to be able to improve yourself."

Yeoman has had loan spells with non-league Bideford and Tiverton Town, but says he wants to stay at Plainmoor and try to force his way into the team.

"At the moment I want to try to play here, maybe in a few months down the line I'll look at it again," he said.

"But for the time being I'll see how it goes."