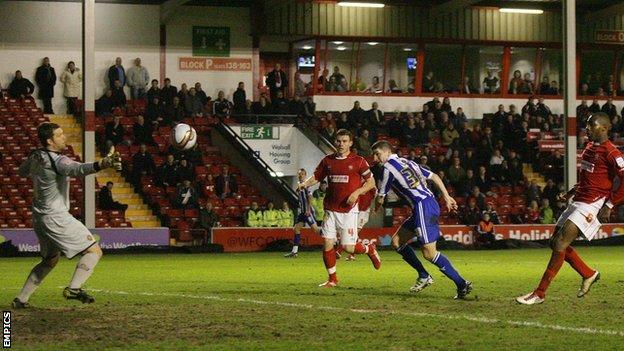 The League One side's gates rose by 11% at Bescot last season as they fought an ultimately successful battle against relegation under Dean Smith.

They lost just four out of their last 17 games - and have continued that form to emerge as early season play-off contenders this time round.

"This is a considerable achievement in a very difficult financial climate," said chief executive Stefan Gamble.

"As football continues to attract negative headlines with a number of high profile administrations, we have been able to 'buck-the-trend' once more by announcing that we have achieved a trading profit of £10,000.

The lads are going out and playing with a smile on their face. And you can go a long way doing that

"Throughout the period we continued to enjoy terrific support from all of our sponsors and commercial partners, both old and new, despite sustained and widespread economic uncertainty."

After losing just three of their first 10 League One games this time round, Walsall currently stand ninth - a point shy of the play-off zone.

And, having already climbed as high as sixth, they would still be there but for Tuesday night's 2-1 home defeat by Leyton Orient, when they had enough chances to have won comfortably and were beaten only by a goal from the halfway line.

"The Orient players said to a man that they were the best team they've played as they left the pitch the other night," Smith told BBC WM.

"And our fans stuck with us as they can see what we're trying to do.

"We've got quality in there.

"The players are playing with a lot of belief and are enjoying what they're doing.

"I don't have to tell them to work hard as they do that naturally.

"They're going out and playing with a smile on their face.

"And you can go a long way doing that."