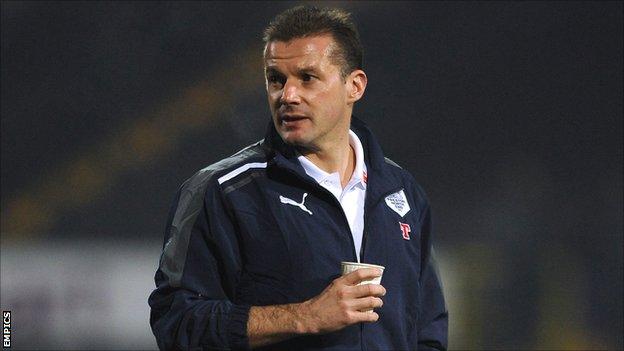 Preston manager Graham Westley says he is "sick to death" of his teams constantly being accused of "dark arts" to gain an advantage over opponents.

"It starts to happen to any side that's got success on the horizon," Westley told BBC Radio Lancashire.

"People start pointing fingers to try to take an edge away from them."

It beggars belief that this nonsense actually gets listened to and I'm sick to death of it. Because you're winning, you're guilty of dark arts

The former Stevenage boss, who said he had heard the claims of gamesmanship against his team from various parties, continued: "Our re-emergence is starting to frighten people, for sure. We've got to make sure we just stay focused on our job."

Preston are seventh in League One after picking up a third win in four league games at the Keepmoat Stadium.

"Our lads were highly professional," said Westley. "They won the game because they scored three goals and only conceded one.

"It beggars belief that this nonsense actually gets listened to and I'm sick to death of it. Because you're winning, you're guilty of dark arts.

"You get word from players too.

"I remember John Mousinho playing for me [at Stevenage] last year. He was forced to walk off the pitch with an injury because he was accused by a referee of feigning injury.

"It's got serious repercussions, all of this nonsense.

"When I see Paul Huntington and David Buchanan going down and being forced off the pitch through the injuries they've taken, and people are talking about gamesmanship - as I say, it's one of the things that you're going to face if you're successful.

"Manchester City face it, Manchester United face it - everyone starts pointing fingers at sides that look as though they're going to be successful because they want an excuse for themselves."