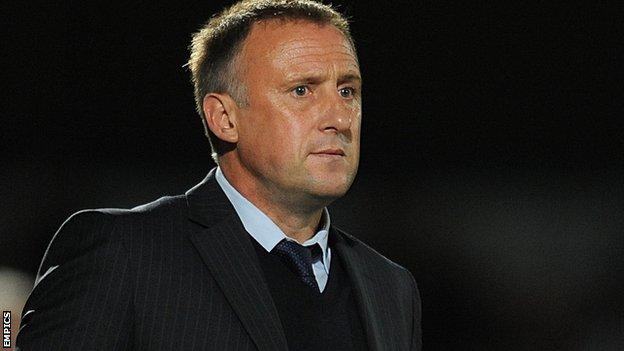 Cheltenham Town manager Mark Yates has confirmed he is trying to sign a midfielder to add to his squad.

Despite sitting fifth in League Two, Yates believes the Robins need to strengthen their side.

"I'm trying to bring in a loan player as we're a little bit light on numbers," he told BBC Gloucestershire.

"We've got options in attack and I'm looking to take another midfield player, just to add something, someone who can play wide or inside."

One thing I need is for the crowds to improve. I need the fans to come and get behind the boys

Summer arrival Darren Carter and Marlon Pack have established themselves in the heart of the Robins midfield in recent games but Yates believes it is an area they still need to strengthen.

Although Yates says there are funds to bring in a player, he has pleaded for fans to come and support the team if they are to improve on last season, where they reached the play-off final but lost 2-0 against Crewe.

"We're a club that does things properly; we try and play the right way," added Yates.

"One thing I need is for the crowds to improve. I need the fans to come and get behind the boys.

"I'm going to the chairman and asking him 'can I bring this player in to improve us?'

"I think he's worried the expectations are there but we're still only getting 2,500 people for home games."