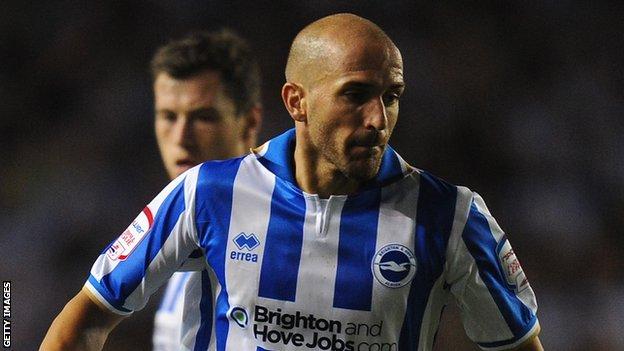 Brighton manager Gus Poyet is delighted with how quickly right-back Bruno has settled into English football.

The 32-year-old Spaniard was an ever-present until a groin injury ruled him out of their last two games.

"From the first minute he understood perfectly what we needed from him. There are not many things he cannot do," Poyet said.

"He's experienced and that's important. With his qualities, and the way that we play, I think that helps a lot."

Bruno joined the Seagulls on a free transfer this summer after three seasons with La Liga side Valencia.

He's not a young 19 or 20-year-old coming to a new country. He knows about football

"All the rest of the players, especially Inigo Calderon, has helped him a lot to settle down," Poyet added.

"When you get to England you have to explain things. For example; don't dive or don't try to cheat.

"They know but until they see it for themselves, they don't realise how important it is."

Meanwhile Poyet has welcomed goalkeeper Tomasz Kuszczak's inclusion in the Poland squad for their friendly against South Africa and their World Cup qualifier against England.

"I know managers don't like players going away and playing but I think the number [you have] measures the quality you have in your team," the Uruguayan said.

"The more players we send to international teams, the better team we have got. I like that a lot.

"I am delighted to have Tomasz because of how professional he is and how much he cares. He has been fantastic."