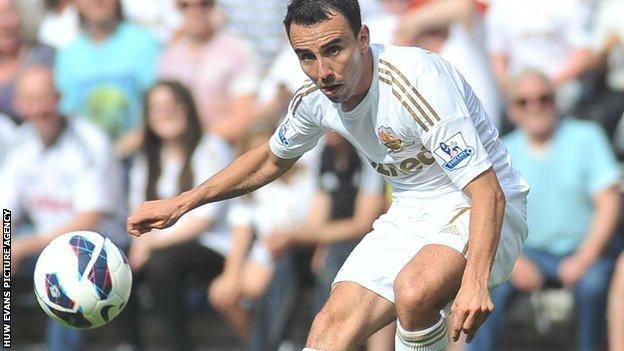 Leon Britton has expressed a desire to stay on at Swansea in some capacity once his playing career is over.

Britton has made 400 appearances for Swansea, which will be marked before the game against Reading.

The 30-year-old joined from West Ham in 2002 and has played in all four divisions during two spell with the Swans.

"I'd like to stay on at the football club when I do eventually hang up my boots," he said.

"I feel I've got a few years left in me at Swansea but it's something I'd like to think about, to stay on in some capacity.

"I've got a great affection for the club. It's played a massive part in my life and it's something I want to carry on for many more years."

Britton initially joined Swansea on loan from West Ham in December 2002 and completed a permanent move at the end of the 2002-2003 season.

The former Arsenal trainee stayed with the Swans until June 2010 when he joined Sheffield United on a free transfer.

But Britton spent only six months at Bramall Lane and admitted the move was a mistake before returning to Swansea in January 2011.

Britton was in the team that secured promotion to the Premier League via the play-offs in May 2011 with victory over Saturday's opponents Reading.

Michael Laudrup's side will be looking to end of three consecutive Premier League defeat against winless Reading.

After impressive wins over QPR and West Ham and a home draw against Sunderland, Swansea lost the following three games against Aston Villa,Everton and Stoke City.

Laudrup says Saturday's game against the Royals is a six-pointer and Britton believes victory would be a timely boost ahead of the international break.

"We were delighted with the start we made but we've dipped a little bit," he said.

"We're going into Saturday against Reading trying to pick up a result and get back to winning ways."