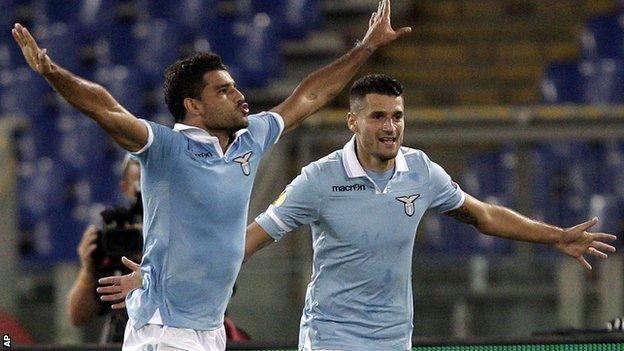 It was a mixed night for Italian sides in the Europa League, with Lazio and Inter Milan both winning but Napoli losing 3-0 to PSV Eindhoven.

Ederson's 62nd-minute winner saw Lazio overcome Slovenia's Maribor 1-0 in Rome to put them top of Group J by a point.

Inter overpowered Neftci of Azerbaijan 3-1 in Group H but are still second behind Rubin Kazan.

Joey Barton, on loan at Marseille from QPR, notched an assist in a 5-1 win over Cyprus side AEL Limassol.

Only three out of the 48 teams competing in the Europa League group stage still boast a 100% record after the opening two rounds of fixtures. Defending champions Atletico Madrid, along with French side Lyon and Dnipro of Ukraine, have all earned six points out of six.

The early kick-off saw veteran striker Samuel Eto'o seal the points for big-spending Russian side Anzhi Makhachkala. The Cameroonian's two late strikes - one a penalty, the other a close-range finish - saw off visitors Young Boys. The 2-0 match was played out in front of a sparse crowd in Moscow, after Uefa banned Anzhi from hosting games in the troubled Dagestan region.

Udinese came from behind to seal three points at Anfield, 3-2 against Liverpool. Antonio Di Natale capped a virtuoso display with a goal 32 seconds after the restart. Liverpool lie third with work still to do to secure a place in the knockout stages.

Defending champions Atletico Madrid snatched a win at home to Czech team Plzen with a 90th minute Cristian Rodriguez goal. The Uruguayan winger joined Atletico in May from Porto, and his new side now top the group by three clear points.

Academica still prop up the table after drawing 1-1 at home to Hapoel Tel-Aviv, but it could have been so much better for the Portuguese hosts. Salim Cisse scored in the 47th minute but they were denied all three points by Israeli international striker Omer Damari's effort in the final minute.

Two six-goal thrillers in this group, with Marseille and Fenerbahce joint top after overpowering AEL Limassol and Borussia Monchengladbach 5-1 and 4-2 respectively.

Marseille's on-loan midfielder Joey Barton provided the corner from which Rod Fanni scored to equalise, before the Ligue 1 side ran away with the fixture with two goals from Loic Remy and a goal apiece from Lucas Mendes and Andre-Pierre Gignac.

Premier League side Newcastle top the table after thumping Bordeaux 3-0 at home. An own goal from Brazilian defender Carlos Henrique represented the nadir for the French team, with strikes either side of it from Shola Ameobi and Papiss Cisse.

Molde, under the stewardship of former Manchester United striker Ole Gunnar Solskjaer, secured their first points of the Europe League campaign with a 2-0 victory over German opponents VfB Stuttgart. In front of 6,000 in Norway, Jo Inge Berget set the home side off and running before defender Daniel Chukwa made the game safe late on.

Steaua Bucharest edged past visitors FC Copenhagen 1-0 thanks to an 83rd minute strike from number 90 Stefan Nikolic. The Romanian side now top the group.

A five-goal thriller in Sweden as AIK Solna fell 3-2 at home to Dnipro. The Ukrainians emerge victorious thanks to a goal apiece from Nikola Kalinic, Vitaliy Mandzyuk and Yevhen Seleznyov.

An easier night for Eredivisie side PSV Eindhoven, whose 3-0 success over a humbled Napoli means they leapfrog the Italians into second place.

Belgian side Genk top the group after holding FA Basel to a 2-2 draw at the Cristal Arena. Genk raced into the lead through Benjamin De Ceulaer and Jelle Vossen, but let two points slip after a second-half double from Swiss international striker Marco Streller.

Hungarians Video Fehervar strolled to a 3-0 home win over Sporting Lisbon, with Paulo Vinicius, Filipe Oliveira and Nemanja Nikolic all scoring before half-time. The humbling leaves The Lions bottom of the standings with just a single point.

First-half strikes from Philippe Coutinho, Joel Obi and Marko Livaja gave Inter Milan a 3-1 win at Neftci of Azerbaijan. "This group of players is on the way up," said coach Andrea Stramaccioni, whose side face AC Milan in the derby on Sunday.

Rubin Kazan still top the group ahead of the Italians following a 2-0 home win over Partizan Belgrade. Gokdeniz Karadeniz scored on the stroke of half-time and Alexander Ryazantsev added a second just after the interval.

Plenty of goals in Prague also, as Sparta emerged 3-1 victors over Athletic Bilbao. Last season's defeated finalists Bilbao now find themselves far behind the two at the head of the table and in real danger of exiting the 2012 Europa League.

Lazio overcome NK Maribor 1-0 in Rome to lead the chasing pack by a point. Ederson's 62nd-minute strike pushed Slovenian champions Maribor down into second place in the group following their 3-0 defeat on Panathinaikos in their opening group game.

The Athens-based side recovered from falling a goal behind to draw 1-1 with Premier League outfit Tottenham. Spurs defender and captain Michael Dawson had nodded his side in front in the first half, only for Spanish striker Toche to slide home for the equaliser.

FC Metalist Kharkiv sealed a 2-0 win over visiting side Rapid Vienna in front of more than 40,000 at Metalist Stadium. Second-half strikes from Edmar Halovskyi and Cleiton Xavier secured the three points and pushed the Ukrainian side to the head of the group.

A home defeat for Rosenborg, 1-0 at the hands of German side Bayer Leverkusen, saw Stefan Kiessling net the decisive strike with 14 minutes left.

Only one win in this group, as Hannover 96 overcame Spanish opponents Levante 2-1. The German hosts played with 10 men from the 10th minute but still managed to come from behind to secure the victory with a penalty from Szabolcs Huszti and the winner courtesy of Didier Ya Konan.

In the other game, Sweden's Helsingborgs prop up the table after seeing their 2-0 lead over FC Twente wiped out by Rasmus Bengtsson and Douglas.