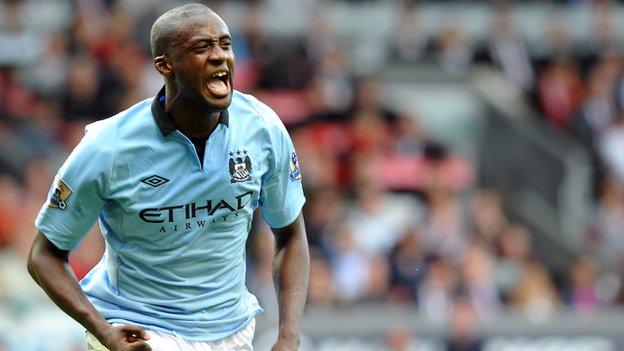 Among them is Ivory Coast and Manchester City midfielder Yaya Toure, who won the honour last year.

Also on the list are three players who currently represent African clubs.

Msakni, however, is set to leave the African Champions, having agreed to join Lekhwiya in Qatar in January 2013.

Kalaba and Sunzu have already enjoyed a successful year, as they were part of Zambia's team that lifted this year's Africa Cup trophy in Gabon.

The African Footballer of the Year award is predominantly won by players based outside Africa while the African Player of the Year prize is dedicated to players plying their trade within Africa.

"I am very happy to be nominated because it's not easy," Kalaba told BBC Sport.

"There are a lot of talented players in Africa and for me to have made it to both shortlists, I am very humbled and happy.

"The chances of winning are 50/50. I can only wait for the final decision but I think everyone has a fair chance of winning."

Sunzu, scorer of the winning penalty against Ivory Coast in the Africa Cup of Nations final, is delighted that his performances have been recognised.

"It's the first time I am being nominated for such an award and I am very pleased," he said.

"This has been a very good year for me after winning the Africa Cup and I can feel it that my form has improved."

Should one of the pair win the award they will emulate the current Football Association of Zambia president Kalusha Bwalya, who took the took the prize in 1988 and is the only recipient of the award from Southern Africa.

The names of the respective 10 and five finalists will then be sent to national associations, head coaches and secretary generals to select the top three finalists.

The awards, which also include Coach of the Year and Club of the Year will be announced at a ceremony on 20 December in the Banquet Hall, State House in the Ghanaian capital Accra.

Nominees for African Player of the Year: