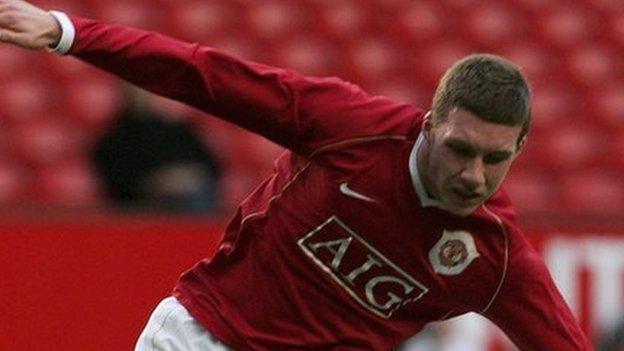 Marsh replaces Sean Canham, who has been allowed to rejoin his old club Bath City on a three-month loan.

Former Manchester United youth player Marsh, 25, joined Rovers in May on a two-year deal after hitting 40 goals in two seasons with Stalybridge Celtic.

"Phil can play anywhere across our front four and drop into midfield if needed," said Bulls boss Martin Foyle.

"With our limited budget he's the type of player we need. Someone who can play in multiple positions.

"The loan is initially for one month, with the option for a further two months."

We all know that finances are playing their part this season and, for us to strengthen the squad, we need to make some room first

"Phil is a very talented player," said Rovers boss Dave Hockaday. "It hasn't quite happened for him at Forest Green yet, but Hereford is a great option for him.

"He'll get games there, bang in lots of goals, and come back to us in form and with even more confidence."

Marsh, who has made just two starts this term, hopes to come straight in for Saturday's home game against Stockport County to boost a Bulls side who have struggled to match their early season firepower.

They hit 11 goals in their first four matches to pick up 10 points from a possible 12.

But they have since scored 12 in their last eight to slump to 10th in the Conference table - 10 points adrift of Forest Green, who won 2-1 at Edgar Street last week.

As for 27-year-old Canham, re-signed on reduced wages on a new short-term deal in June, despite scoring three times in those opening four games, he has since been displaced following the return of Ryan Bowman and Marlon Jackson to fitness.

"Sean has been a great character to have around," said Foyle, "but Bath showed an interest in him.

"It's come at the right time for us. We all know that finances are playing their part this season, and for us to strengthen the squad we need to make some room first."