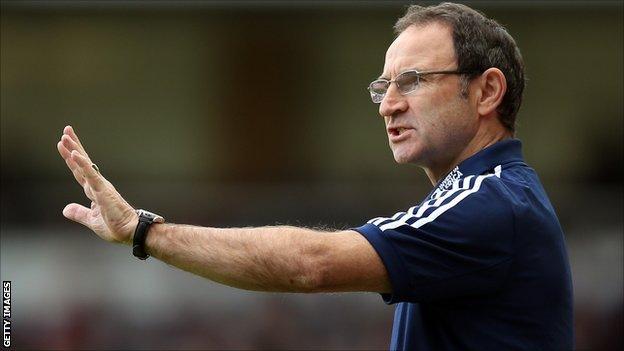 The announcement of international squads this week saw a number of Black Cats players called up for duty, including Scotland's Steven Fletcher.

"It's a big concern for me and for other managers in my position," O'Neill told BBC Newcastle.

"There's a pattern at club level and then they go on international duty and it can upset the rhythm."

He added: "You're never sure what sort of training they're doing and how they're settling, but thankfully this is the last international break for some considerable time."

Fletcher back in the fold

Scotland recalled Steven Fletcher after 20 months in the wilderness on Tuesday.

Fletcher was left out of a home international squad in February 2011 and then refused to play for current boss Craig Levein.

His international record stands at one goal in eight appearances.

O'Neill's side took four points from six against City during the last campaign, with the 1-0 win on Wearside one of only five defeats for Roberto Mancini's champions.

"We were the only team to take some points off them [at the Etihad] in the Premier League," O'Neill continued.

"The players should draw some sort of confidence from that."

The Black Cats drew 3-3 on their last visit to the Etihad Stadium in what O'Neill described as "probably our best away performance".