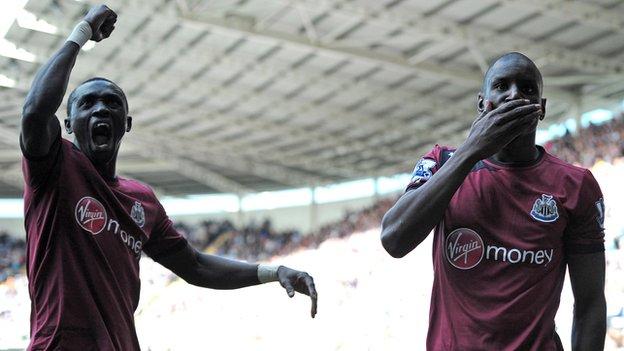 The trio are on a 34-man list revealed by the Confederation of African Football and Pardew is optimistic that one of them could take the prize.

"They must be very proud because it's a fantastic honour to win that award," he told BBC Sport.

"And I think all three of them have got a chance."

Senegal international striker Cisse made a blistering start to his Newcastle career, scoring 13 goals in his first 14 league games after he joined the club from Bundesliga club Freiburg in January.

And Ivory Coast midfielder Tiote has been described by Pardew as "a big player for us" who was "sorely missed" when he was out of action with an injury at the start of this season.

Pardew said: "The Premier League is the best in the world - there is no doubt about that - and all three players are right at the top of the tree in terms of the African players in the league.

"Some good players - Samuel Eto'o and Didier Drogba - have won the African Player of the Year award, so that's good company to be in.

"And if any one of my players can bring an award like that to Newcastle, it would the icing on the cake - for [their contributions] last season in particular.

"They all have a chance to win the award and I hope that will be reflected in the voting."

Caf will narrow the list down to a top 10 in late October and national associations, head coaches and secretary generals will then select the top three finalists.

The winner will be revealed at an awards ceremony which will take place in Ghanaian capital Accra on 20 December.

Meanwhile, Pardew admitted he has one eye on the upcoming 2013 Africa Cup of Nations qualifier final round second leg between Senegal and Ivory Coast - a game which involves all three of his African stars.

Ivory Coast lead 4-2 from the first leg but Pardew believes the tie is finely balanced, which also means he has no idea which of his players he will lose to international duty when the tournament takes place next year between 19 January and 10 February.

"But if it's the other way round, I have no problem with that - I'll have Chieck on board.

"It's an interesting fixture, poised actually, and I think it'll be hard to hold on to a two-goal lead but we'll see."

Asked what his preferred outcome was, Pardew quickly adopted a diplomatic stance.

"Senegal love Newcastle and if they heard the Newcastle manager is rooting for another country they wouldn't be happy, so I am completely neutral," he insisted.